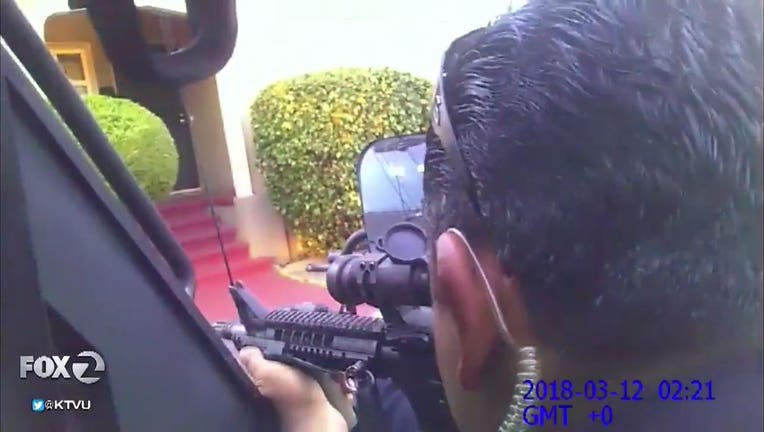 OAKLAND, Calif. - Faced with mounting criticism from community advocates over what they perceive as the warlike takeover of their streets, the Oakland Police Commission is proposing unprecedented regulations over the police department’s purchase and use of militarized equipment.

The ordinance would for the first time require that Oakland police get commissioners’ approval before acquiring any military-style equipment, create a “use policy” and a way for citizens to register complaints. It would also mandate a yearly public report to assess how the equipment was used, and if it benefited or harmed the community.

A final vote could take place by this summer. The commission is made up of seven citizens, who are vested with the power to oversee the Oakland Police Department’s policies, set standards and oversee the agency that investigates misconduct.

“The goal is to set up a regulatory framework,” said Henry Gage, a police commissioner and co-author of the ordinance. “Police departments ask for the moon and they usually get it. But no one goes back to see if what they said they were going to use it for is actually how they used it.”

The “Acquisition and Use of Militarized Equipment” ordinance, set to be discussed at Thursday’s meeting, would regulate such equipment including the Bearcat, the Mine-Resistant Ambush Protected vehicles, known as MRAPs, Humvees, battering rams, riot guns, projectile launchers, flash grenades, tear gas and firearms of .50 or greater, to name several.

The Bearcat is a bullet-proof, armored personnel carrier designed for military and law enforcement, and its particular use and symbolism is a sore point for many in the community and on the commission.

An analysis conducted by 2 Investigates shows that police deployed the  Bearcat about seven times a month - or nearly twice a week - in predominantly East Oakland neighborhoods, and rarely in the affluent hills. San Francisco deployed the Bearcat on average less than twice a month during 2019, records from that city show. In fact, in the last six months of the year, police didn't send it out at all.

To compare, Oakland police sent the vehicle out on average 84 times in a year's time, compared to San Francisco, which sent it out 21 times last year. San Jose does not track its Bearcat deployment use. 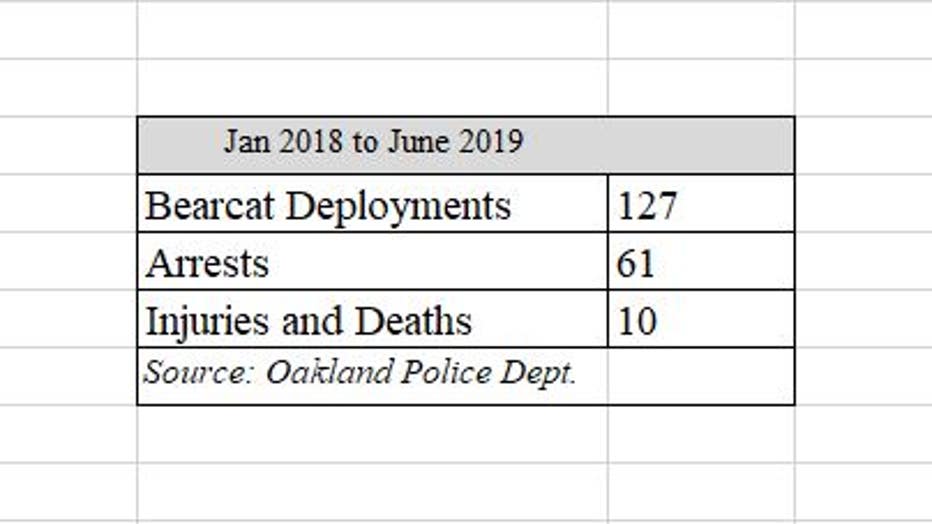 Both situations were defended by police who said they were heading into potentially dangerous situations and needed the extra protection of bullet-proof cover. But both situations drew the ire of some community activists for what seemed to them as heavy-handed measures. And to some, these tactics carry racial overtones.The Bearcat has been used recently in some high-profile events. Last month, an Alameda County Sheriff’s Bearcat was brought in during the eviction of mothers who moved into a West Oakland home without paying rent. And Oakland police used the armored Bearcat as a perch, a federal monitor found, to shoot and kill Joshua Pawlik, a homeless man who was passed out with a gun, in front of an Oakland home two years ago.

“Militarized equipment ups the stakes for an already problematic police department,” Gage said. “And it exacerbates the impact of the problems that already exist with police and their relationship with communities of color.”

Oakland police declined a request for comment on the commission’s current proposal.

But last June, Police Chief Anne Kirkpatrick explained to the commission that armored vehicles’ capabilities “far exceed” what a patrol car can do in terms of ballistic protection and can be stocked with tools needed to drive into a critical incident.

Capt. Randall Wingate told commissioners at their June 27 meeting, that the “Bearcat is the only vehicle we have that can actually stop bullets.” He added that there is nothing that “even comes close” to more effectively coming in between bullets and the “flesh of officers.”

Five months later, at a Nov. 14 meeting, Deputy Chief of Police Leronne Armstrong told the commission that the Bearcat was crucial to officer safety: “In the last 24 hours, we’ve had almost five different incidents where people in our community were using rifles against other people.” He added that he doesn’t believe all the criticism about transparency and usage is warranted. “o say we don’t have policies in place, I don’t believe that’s accurate,” he said. “It’s a testament to that we have been progressive in terms of when we use this equipment…we’re actually monitoring the use of this equipment. There are some things we don’t get credit for. We are advanced for other departments.”

In addition to being deployed emergencies, Oakland police like to deploy the BearCat to sporting events and community outings, in part, so they can deter threats and use the vehicle in a possible rescue situation. And at peaceful events, such as the Boy Scouts or the Polar Plunge, Kirkpatrick said the BearCat is often “well received” by the public.

Figuring out  how many times Oakland police use the Bearcat and other military-style equipment -- and how they deploy it -- has been a “Herculean” task, Gage noted.

For example, it took police five months to fulfill a joint Public Records Request by 2 Investigates and the American Friends Service Committee, a national Quaker group that promotes peace.

The request sought to find out how many times the Bearcat had been used and for what reasons over the last five years. Police said that task was too daunting, and the department answered a modified request going back 18 months, from January 2018 to June 2019.

The data they released shows that Oakland police sent the Bearcat out 127 times; the majority of deployments were for what police described as high-risk arrests or answering a call about a  “dangerous” person. The Bearcat was used 14 times at public events, including Warriors games and when Michelle Obama came to town. Police brought the Bearcat out at four sideshows. Of the total amount, eight injuries and two deaths were reported, and 61 arrests were made.

The data provided, however, is hard for the layperson to definitively tell why the Bearcat was called for.

Some examples of the entries:

June 17, 2018 Caller reported person posted that they were going to shoot up a school and had posted a picture of a firearm (rifle.) Subject detained. Replica AR-15 firearm and BB rifle recovered from subject’s room. Other firearms (shotgun and handgun) also found in home taken for safekeeping. Subject placed on hold for mental illness and not arrested pending further investigation.

March 25, 2019 Caller reported that she was livestreaming video from the cameras inside her home and was watching a male suspect who had broken into her house armed with a firearm. Residence surrounded and suspect surrendered. No firearm recovered.

Feb. 1, 2019 Caller reported a male wearing a bullet proof vest with an AR-15 strapped to his body and carrying a duffle bag. Area searched but subject not located.

"It seems like the only rule they have for bringing out the Bearcat is if a captain approves it," said John Lindsay-Poland of the American Friends Service Committee and the other co-author of the ordinance. "I think there might be occasions to bring it out. But there needs to be more evidence that a threat is likely to occur and a Bearcat is likely to be useful in countering such a threat."

Lindsay-Poland also noted where the Bearcats were deployed: In almost every instance, the armored vehicle was sent to poor and mostly minority neighborhoods in East Oakland, but never in the affluent hills.

The modern militarization of police in America is not particular to Oakland. It’s a debate in cities across the United States. And it’s a conversation that also digs deep into race. People of color say they feel terrorized by the tanks and rifles, while those who have never had a Bearcat roll through their neighborhood don’t seem to understand the symbolic potency of the ballistic vehicle.

The topic reared its head most visibly in the last decade in 2014, after Michael Brown Jr., an 18-year-old African American man, was fatally shot by a white Ferguson police officer. Riots ensued and the police moved in with militarized gear to quiet the crowds.

Before that, urban riots of the 1960s led to President Lyndon B. Johnson sign into law an act that made local grants available to purchase military-type resources to suppress the civil rights protesters.  President Richard M. Nixon’s declaration of the war on drugs in 1971 and its reemphasis by President Ronald Reagan in the1980s further enhanced the militarization of the police and the disproportionate effect it had on African Americans.

Then, in 2011, the terrorist attacks of 9/11 led to the Patriot Act, allowing many police departments to secure military gear to support the “war on terror” with military-style weapons.

Gage noted this long history of the racist perceptions of military equipment in the United States, and the current need to do something about it.

And he said what he and 40 other community organizations who have signed onto the ordinance are asking for shouldn’t be all that groundbreaking.

The goal of the militarized equipment ordinance, he said, is to simply have police “lay out a plan and conduct an annual check-in.”

“This legislation should not be a big deal,” Gage said. “We should have been doing it already.”