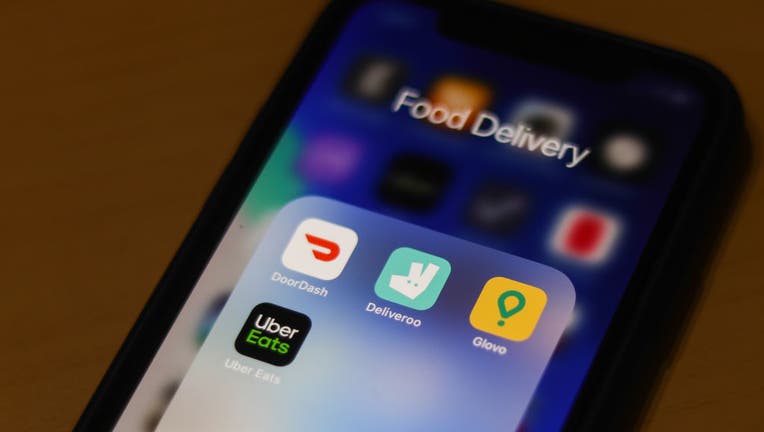 DoorDash, Deliveroo, Glovo and Uber Eats apps icons are seen on the smartphone screen in this illustration photo taken in Krakow, Poland on March 17, 2020. (Photo by Jakub Porzycki/NurPhoto via Getty Images)

OAKLAND, Calif. - Oakland leaders on Tuesday set a maximum allowed fee that restaurants must pay to services such as Uber Eats that deliver their food to locations in the city, a councilman said.

The cap is 15 percent of each order, which Councilman Dan Kalb said on Wednesday is half of what was being charged.

"The idea is to help our restaurants," Kalb said, adding that they are struggling to bring in business.

Dining out is prohibited in Alameda County but restaurants may sell food for delivery or pickup.

City leaders used an emergency ordinance, which goes into effect immediately and lasts until 90 days after the health emergency, to cap the fees that delivery services can charge restaurants.

"In general, we think it is a good thing," said Ari Takata-Vasquez, owner of Viscera, which is part of the Oakland Indie Alliance, a nonprofit organization representing about 500 Oakland small businesses, including restaurants.

But Takata-Vasquez and others are concerned about enforcement. She said that in San Francisco restaurants must report when food delivery services exceed the cap set by the city.

"There could be retaliation," she said. "They could kick you off their platform."

Some restaurants have been being charged even more than 30 percent, she said. In one instance, the restaurant tried unsuccessfully to discuss the fees with the service provider, she said, and nothing changed.

An Uber spokesman claimed the company focuses its efforts on "driving demand to independent local restaurants."

"Regulating the commissions that fund our marketplace forces us to radically alter the way we do business and ultimately hurt those that we're trying to help the most: customers, small businesses and delivery people," the spokesman said.

Taylor Bennett, a spokesperson for DoorDash said that "merchant fees help pay for a variety of costs to support all three sides of our marketplace. A cap to our commissions means we may not be able to provide the level of quality customers expect, pay Dashers meaningful earnings, and drive sales that are so important to restaurants right now."

Grubhub said, "Our goal is to support restaurants, and with our business model, that is done through different products and services that drive orders to restaurants." A company spokesman said "any arbitrary cap" and said will reduce orders to locally owned restaurants.