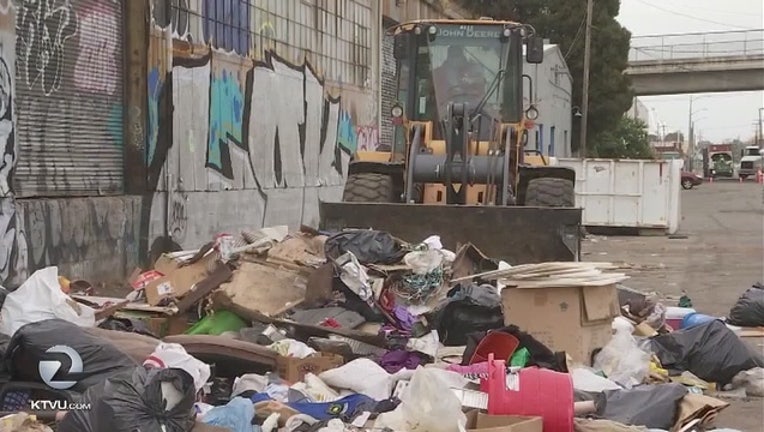 An Oakland homeless encampment is cleared in an effort to prevent a hepatitis A outbreak. San Francisco is undergoing their own preventative measures.

OAKLAND, Calif. - Oakland City Council President Rebecca Kaplan said on Wednesday that putting homeless people on cruise ships is one of a number of proposals she has for helping the growing number of homeless people in her city.

She said additional measures she proposed are eviction prevention to stop more people from being pushed into homelessness and co-governed encampments.

Kaplan said some of those strategies were already voted on and approved by the City Council but haven't yet been implemented by Mayor Libby Schaaf's administration.

In a statement, Kaplan said, "Homelessness has been rising dramatically and causing substantial human suffering. We must respond to the
magnitude of the crisis.

"We must account for and allocate impact fees to build deeply affordable housing, re-use vacant buildings, provide allowable spaces for safe RV parking with sanitation and services and explore all options, including co-governed encampments and cruise ships."

She added, "We also recognize that as more and more of our local residents are pushed out of their homes by rising rents and no-cause evictions, we must also strengthen actions to support tenants and prevent displacement."

Kaplan said, "With many thousands of people living on the sidewalks and underpasses, we must have an 'all hands on deck' approach and be willing both to expand known strategies, such as navigation centers, and include innovative solutions, like cruise ships and co-managed encampments."

The council president said, "The overwhelming majority of people who are homeless in our community are from here and were displaced by economic pressures" and described them as "our internal economic refugees."