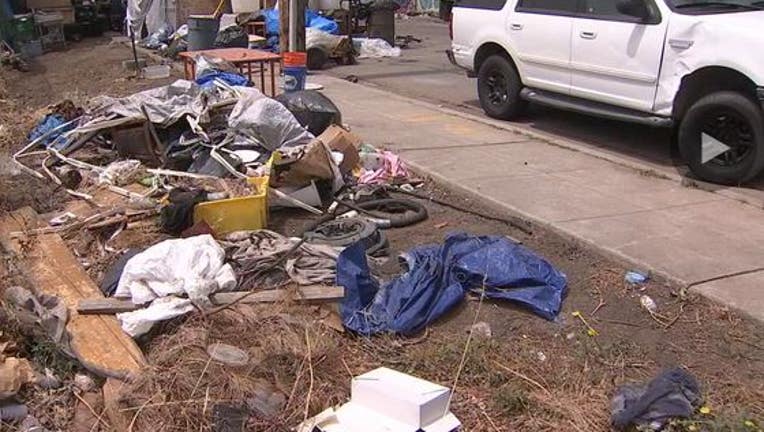 Trash sits on a dead end street near the Home Depot in Oakland.

OAKLAND, Calif. - The city of Oakland opened a safe parking site for 41 RVs in the city's Fruitvale district on Monday.

The parking site at 615 High St., adjacent to a Home Depot store, is the third such location the city has opened to serve the growing number of people who are living in RVs because of the high cost of housing in Oakland.

Oakland officials said the new site will be staffed around the clock and have security, electricity, drinking water, portable toilets, weekly shower service, garbage service, limited passenger vehicle parking and the opportunity for participants to bring their pets.

The city said the parking site is designed to serve any unsheltered resident over the age of 18 who currently resides in an RV at the East 8th Street and Alameda Avenue community next to Home Depot.

The site will be managed and operated by the Housing Consortium of the East Bay, which also operates the safe RV parking site at 71st Avenue in East Oakland, across from the Coliseum BART station, and the Lake Merritt Community Cabins.

Oakland officials said the design and intent of the RV safe parking program is to promote and protect a safe and healthy community that considers the different needs, preferences, and lifestyles of its residents and honors people's personal choices as well as community wellness.

They said participation is voluntary and participants are able to live safely off-street in their vehicles with sanitation and security while working toward self-sufficiency.

The first safe RV site was the one at 71st Avenue, which opened last May and accommodates up to 45 RVs.

The second site is on Beach Street adjacent to the Mandela Community Cabins in West Oakland on the Emeryville border, which opened last August 2019 and accommodates up to 17 RVs.

That site is managed by Operation Dignity, which also manages the Mandela Community Cabins.

City officials said a fourth RV safe parking site is planned for 2400 Wood St. in West Oakland, a four-acre private property, which the owner is leasing to the city for up to three years with no monthly rental fee.

That site will accommodate up to 80 RVs.

The city said the property owner is in the final stages of clearing the property to allow the city to move forward with construction of the site.

City officials said it costs about $600,000 for each RV safe parking site to operate. Grant funding is provided through the state's Homeless Emergency Aid Program.