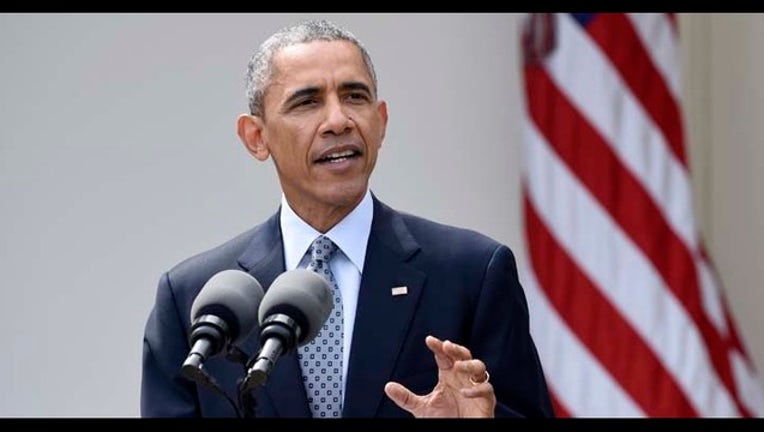 WASHINGTON (AP) — President Barack Obama heralded a framework nuclear understanding with Iran as a "historic" agreement and warned Congress Thursday against taking action that could upend work toward a final deal.

"The issues at stake here are bigger than politics," Obama said during remarks in the White House Rose Garden. "These are matters of war and peace, and they should be evaluated based on the facts."

Obama spoke hours after negotiators in Switzerland reached a framework agreement outlining limits on Iran's nuclear program and setting the stage for work on a final deal over the next three months.

The president called the agreement "a good deal, a deal that meets our core objectives." He said verification mechanisms built into the framework agreed to in Switzerland hours earlier would ensure that "if Iran cheats, the world will know it."

Obama has invested significant political capital in the nuclear negotiations. The talks have strained the U.S. relationship with Israel, which sees Tehran as an existential threat, and deepened tensions with Congress.

One of Obama's toughest challenges will be convincing lawmakers to hold off on legislation that would authorize new sanctions on Iran. He warned anew Thursday that approving new sanctions in the midst of the delicate diplomacy could scuttle the talks.

"It's the United States that will be blamed for the failure of international diplomacy," he warned.

Obama said his administration would fully brief lawmakers on the agreement and he planned to speak to congressional leaders later in the day.

The U.S.-led diplomatic negotiations have also sparked concerns among allies in the Middle East who fear Iran could be left on the brink of a nuclear bomb. Israel and several Arab nations also say the nuclear talks ignore Iran's support for terrorism and destabilizing activity in the region.

The president said he had spoken with the Saudi king and planned to discuss the agreement with Israeli Prime Minister Benjamin Netanyahu. He also announced that he was inviting the leaders of six Gulf nations — Saudi Arabia, the United Arab Emirates, Oman, Qatar, Bahrain and Kuwait — to Washington this spring.