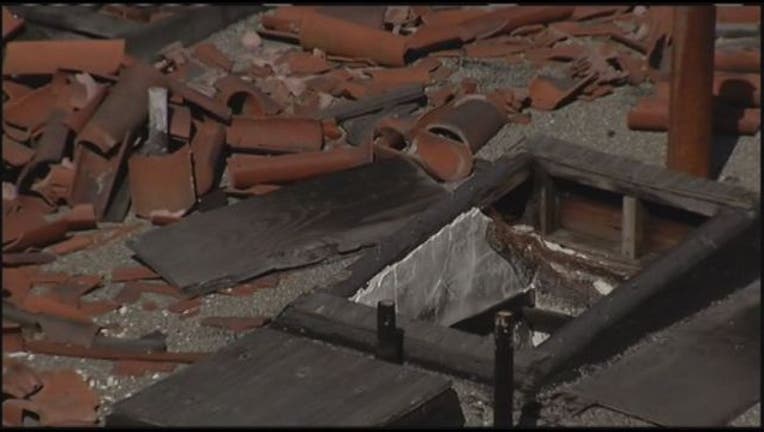 SAN FRANCISCO (KTVU) - The old abandoned Potrero Police Station on the corner of 3rd and 20th streets in San Francisco's Dogpatch Historic District has some fresh splotches of paint on it to cover up graffiti that has been accumulating over the years.

"It's in dire need of some help," said neighboring business owner, Terry Heffernan. "It has been ignored, is owned by someone who has much deeper pockets than I do, and is quick to give me a ticket if I get graffiti on my building." That's because the building is owned by the City of San Francisco.

The roof of the old building is torn apart from a fire in 2012. Garbage and graffiti are the only landscaping. The vacant property isn't totally vacant.

KTVU saw a woman unlocking her makeshift gate to leave her tarp and umbrella covered encampment in the back lot.

"Man up! Put yourself in our shoes and just act the same way you would if you were an individual who owned a piece of property in the Dogpatch," Heffernan said looking at the property from his rooftop. "It's a jewel. Somewhere down there in that garbage heap, there's a jewel."

KTVU called the city's Department of Public Works, who told us to call the Department of Real Estate, who told us to call the Police Department, which was the last to occupy the abandoned building. "Know that nobody in the neighborhood wants a property in disrepair," Police Chief Greg Suhr told KTVU. "And so as soon as we were made aware of it (by KTVU) we're responsible to take care of it."

True to his word, the Chief called DPW, and by Wednesday evening the graffiti was covered up with paint and a homeless encampment was cleared. The city has been looking into making repairs to be able to put the property up for sale.

"I'm amazed it's taken this long," said Heffernan. "Look in the mirror in the morning and find out what the city properties are and let's start with yourselves and set a great example and we'll follow. We're looking for leadership. We're just looking for good leadership."