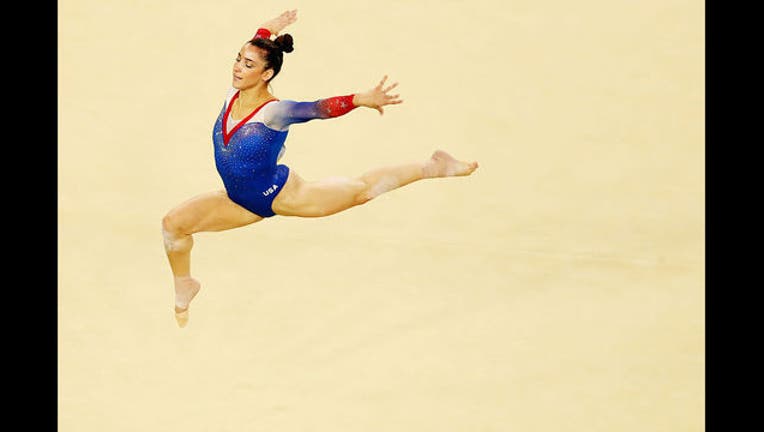 Alexandra Raisman of the United States competes on the Women's Floor final on Day 11 of the Rio 2016 Olympic Games at the Rio Olympic Arena on August 16, 2016 in Rio de Janeiro, Brazil. (Photo by Dean Mouhtaropoulos/Getty Images)

Raisman filed the lawsuit in Santa Clara County Superior Court in San Jose, Calif. on Wednesday. The filing alleges negligence by the USOC and USA Gymnastics for failing to make sure appropriate protocols were followed in regards to monitoring Larry Nassar. Nassar, who is named as a co-defendant in the lawsuit, is serving decades in prison for molesting some of the sport's top athletes and others as well as child pornography crimes.

Sean Simko of Manly, Stewart & Finaldi, the firm that filed the 51-page complaint, told the Mercury News that the suit was filed where it was because Raisman alleges she was abused at the 2012 Olympic gymnastics trials at what used to be HP Pavilion in San Jose.

The 23-year-old Raisman, captain for both the gold-medal winning 2012 and 2016 U.S. women's Olympic gymnastics teams, says she was abused by Nassar in multiple locations beginning in 2010, including at the U.S. national team training facility at the Karolyi Ranch training center in Texas and the 2012 Games in London. Raisman said she initially felt she was receiving medically necessary treatment by Nassar before realizing it was abuse. She battled shame, guilt and depression in the aftermath, Raisman said.

Nassar spent nearly three decades at USA Gymnastics before being fired in 2015 after complaints about his behavior. He continued to work at Michigan State University through the fall of 2016 before being hit with federal charges. Raisman said the USOC and USA Gymnastics allowed Nassar to continue abusing athletes by not telling the university about the conduct that led them to fire him.

USA Gymnastics and the USOC broke their stated mandates to protect children in their programs by not revealing Nassar's past misconduct to athletes and their parents or guardians, the lawsuit said.

Raisman joins a list of more than 100 civil actions filed against Nassar and USA Gymnastics. McKayla Maroney, an Olympic teammate of Raisman's in 2012, named the USOC as a co-defendant in a lawsuit she filed last December.

USA Gymnastics and the USOC did not immediately respond to a request for comment from The Associated Press.

Raisman, who has become a vocal critic of both organizations after initially revealing the abuse in her autobiography released last fall, did not plan to go to court but says she felt compelled to press forward because she believes USA Gymnastics and the USOC are not making a sincere effort to "properly address the problem."

"I refuse to wait any longer for these organizations to do the right thing," Raisman said in a statement. "It is my hope that the legal process will hold them accountable and enable the change that is so desperately needed."

The USOC is conducting an independent review of when former CEO Scott Blackmun and others learned the details about abuse cases at USA Gymnastics and whether they responded appropriately. Blackmun stepped down earlier this week to deal with prostate cancer, though Raisman, several high-profile gymnasts and two U.S. Senators had been calling for his ouster for weeks.

USA Gymnastics has undergone a massive overhaul in the last year. Former president Steve Penny, named as a co-defendant in Raisman's lawsuit, resigned last March. Longtime chairman of the board Paul Parilla, another co-defendant in the suit, and the rest of the board stepped down in January under heavy pressure from the USOC. USA Gymnastics also ended its relationship with the Karolyi Ranch in January and is currently searching for a new training center.

"It has become painfully clear that these organizations have no intention of properly addressing this problem," Raisman said. "After all this time, they remain unwilling to conduct a full investigation, and without a solid understanding of how this happened, it is delusional to think sufficient changes can be implemented."

Raisman's lawsuit claims both organizations focused on medals instead of the well-being of the athletes, a model that allowed Nassar's behavior to go unchecked for years.

The lawsuit says the USOC "had a culture and atmosphere that conceals known and suspected sexual abusers, which transcends all policies and procedures that are set-in place." Raisman believes the USOC ignored its own mandates "to protect its reputation and blind itself to known abusers within the ranks of the NGBs (National Governing Bodies) for which it is responsible."