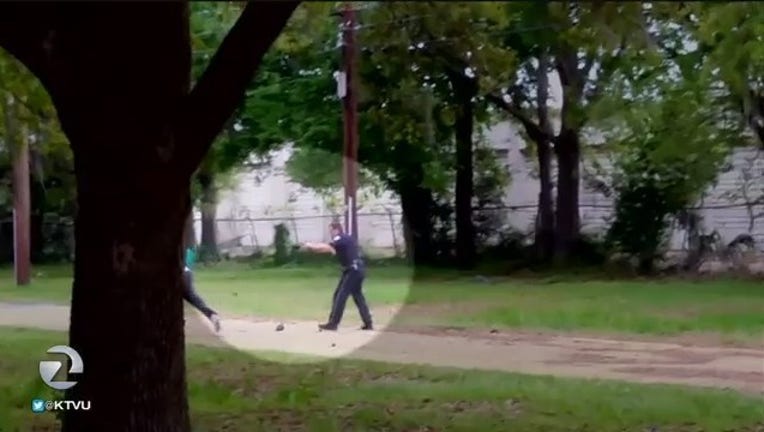 OAKLAND, Calif. (KTVU and wires) - Cell phone video has led to the arrest of a South Carolina police officer for fatally shooting an unarmed man, re-igniting concerns nationwide over the use of deadly force by police and questions of race.

The video appears to contradict the original account by North Charleston Police Officer Michael Thomas Slager, 33, who reported that Walter Lamer Scott, 50, had grabbed the officer's Taser and Slager feared for his life.

Slager had pulled Scott's grey Mercedes over for a broken tail light Saturday morning. A barber was passing by and says he started recording when he heard the sound of a Taser. On the video, Officer Slager can be seen pulling out his gun as Scott is turning away and running in the opposite direction. Officer Slager points his gun at Scott's back and there is a sound of 8 gunshots. Scott falls to the ground.

"I have watched the video and I was sickened by what I saw," said North Charleston Police Chief Eddie Driggers, who faced the media and shouts from protestors who shouted, "No justice, no peace." at a news conference Wednesday.

Officer Slager, who had five years on the force, has been fired and is now facing murder charges. North Charleston Mayor Keith Summey said Wednesday that the city has agreed to pay health care until Slager's wife, who is 8 months pregnant, delivers their child.

Slager was denied bond Tuesday and could face 30 years to life in prison if convicted of murder.

Walter Scott's mother, Judy Scott, said she is mourning for her own son who leaves behind children.

Nationwide, this fatal shooting of a black man by a white officer has raised more questions in the wake of shootings in New York, Ferguson, and Oakland.

Oakland attorney Adante Pointer was an attorney for the family of Oscar Grant, whose fatal shooting by a BART police officer in 2009 was also captured on cell phone video.

"The distinguishing factor between Oscar Grant and this case is how calm the officer appeared to be after firing 8 bullets into the man's back. The officer didn't appear to have emotional reaction to this," Pointer told KTVU.

Pointer says what happened prior to the shooting is not the legal question, but rather, whether there was any threat to the officer when he pulled the trigger that would justify the use of deadly force.

The cell phone video shows Officer Slager handcuff Scott after firing and then walk out of sight. Another officer arrives at the scene and Slager returns to the body with a dark object in his hand, that he appears to drop near Scott's body.

For veteran police officers, the video appears to contradict every rule and training about use of deadly force.

Richmond Deputy Police Chief Allwyn Brown, has been in law enforcement for 30 years.

"I can't think of any other circumstance where you would aim and fire continuously at someone going the other way who doesn't appear to be posing an immediate threat," he told KTVU.

Dep. Chief Brown says his department has a policy of reviewing every incident involving questionable use of police force and says it's important for police to catch issues before they escalate. He says Richmond Police also issued body cameras earlier this year to record officers' interactions.

North Charleston's mayor said he's ordered body cameras to be worn by every single officer on the force.

Scott's family and their attorney, L. Chris Stewart, appealed to keep the protests peaceful, saying the swift murder charge shows that the justice system is working so far in this case. Scott had four children, was engaged and had been honorably discharged from the U.S. Coast Guard. There were no violent offenses on his record, Stewart said. He also speculated that Scott may have tried to run because he owed child support, which can lead to jail time in South Carolina until it is paid. Stewart added that the family plans to sue the police.

North Charleston is South Carolina's third-largest city, and its population is about half black. Its economy slumped after the Charleston Naval Base on the city's waterfront closed in the mid-1990s, but the city has bounced back with a huge investment by Boeing, which now employs about 7,500 people in the state and builds 787 aircraft in city.

The FBI and the Justice Department's Civil Rights Division are investigating as well. Proving that an officer willfully deprived an individual of his or her civil rights has historically been a tall burden for federal prosecutors, particularly when an officer uses force during a rapidly unfolding physical confrontation in which split-second decisions are made.

The Justice Department spent months investigating the Ferguson shooting before declining to prosecute Officer Darren Wilson in that case. But it's easier to make cases against officers who use force as an act of retribution or who can make no reasonable claim that their life was in jeopardy when they took action.