Outbreak of Legionnaires' disease in Napa County causes one death

CDC investigators have arrived in Napa to help track down the source of the Legionnaires' disease outbreak in Napa County that has sickened and hospitalized 12 people in the last month has now caused one death, health officials confirm.

NAPA, Calif. - The outbreak of Legionnaires' disease in Napa County that has sickened and hospitalized 12 people in the last month has now caused one death, health officials confirm. It is the first death from the disease in the county in several years. The first cases were reported July 11.

"We are deeply saddened by the death of this individual, and our thoughts and condolences go out to the family. We share concern for all impacted by this outbreak,"  said Napa County's public health director Dr. Karen Relucio.

Relucio told KTVU that the Napa health department is working with the California Department of Public Health and Napa County Environmental Health Branch of the Planning Building and Environmental Services Department to investigate these cases.

Investigators with the Centers For Disease Control and Prevention also have been called in to help.

"They've sent a team that is helping our public health and environmental health teams investigate possible sources of the outbreak," said Relucio.

Legionnaires' disease is a type of pneumonia caused by bacteria called Legionella, which grows in warm water. It is not spread person-to-person but is transmitted via breathing in small droplets of water containing the bacteria.

Health officials say the symptoms can be similar to other illnesses,

"It can be associated with body aches, fever, diarrhea, and vomiting, and then they get a severe pneumonia that might not be responsive for anti-biotic therapy," said Relucio.

"With everything else going on, with COVID, monkeypox, it's one more thing to worry about," said Chris Adrian, a Napa resident.

People over 50 years old, smokers, or those with lung problems are most at risk.

"Well, I have to be careful then, because I'm over 50," said Dora Najara, a Napa resident.

The Legionella bacteria grows in warm water and is transmitted through tiny aerosol particles rather than person-to-person contact.

Often the bacteria grows in artificial water sources such as cooling towers, fountains, or hot tubs that are not properly cleaned or maintained.

"It is in a two-mile square area in the city of Napa and at this point we are trying to investigate every possible water source including cooling towers, decorative fountains," said Relucio.

The investigation includes sampling for bacteria and remediation strategies where appropriate to prevent further transmission.

Health officials hope all residents will take steps to prevent the bacteria's spread.

"Maintaining your water fountains, hot tubs and other structures to prevent the development of Legionella in the structures in the first place."

Health officials hope all residents will take steps to prevent the bacteria's spread.

"Maintaining your water fountains, hot tubs and other structures to prevent the development of Legionella in the structures in the first place," said Relucio.

According to the CDC, as many as 10,000 cases of Legionnaires' Disease are reported every year, with one in 10 patients dying from the disease. 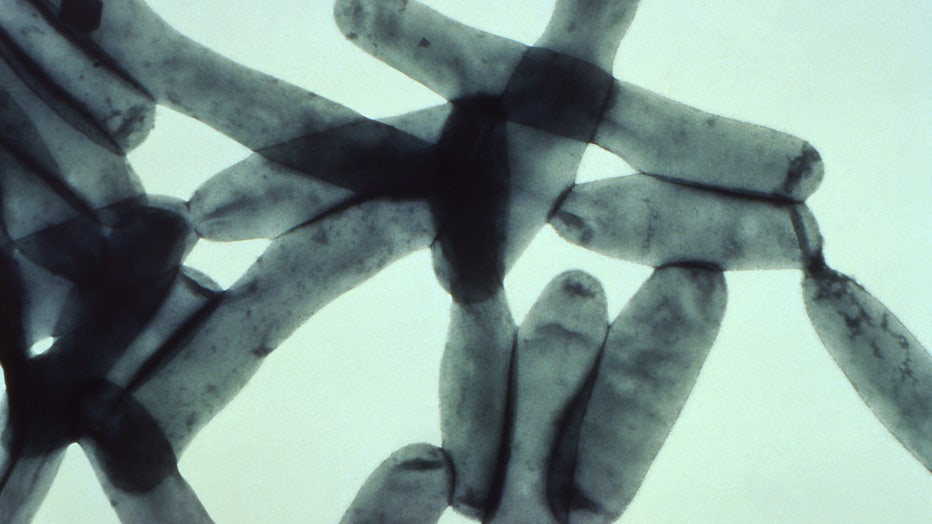 Under a magnification of 43,700X, this transmission electron micrograph (TEM) created from a whole preparation of Legionella pneumophila bacteria that had been negatively stained using uranyl acetate, and grown on bacteriologic medium, reveals L. pne