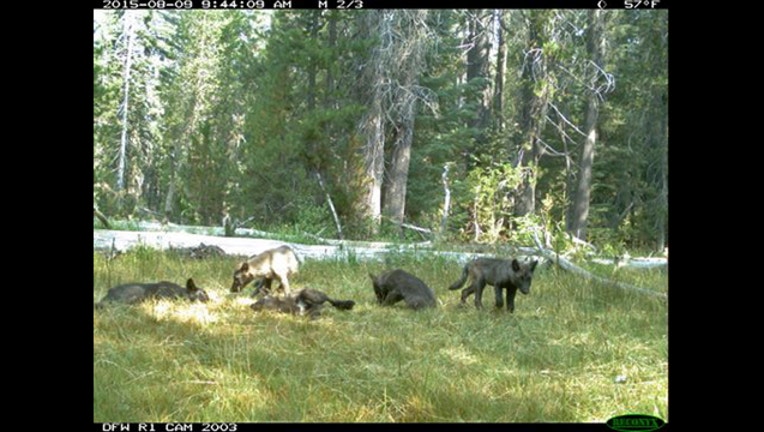 FILE - In this Aug. 9, 2015, file photo, still image from video released by the California Dept. of Fish and Wildlife shows evidence of five gray wolf pups and two adults in Northern California. California has its first wolf pack since the state's la

The first wolf pack to make the state home in nearly a century hasn't been seen since May 2016, the San Francisco Chronicle reports Saturday (http://bit.ly/2mUMSjo).

The family, known as the Shasta Pack, disappeared from southeastern Siskiyou County.

California Department of Fish and Wildlife biologist Pete Figura said they could have migrated to a new region with more prey. Though he points out it's unusual for the canine pack hunters to abandon their breeding grounds.

"We're reasonably confident that last year they did not use the same area as a pack as they did the year before, and we don't know why," Figura said. "Why they were not detected anywhere else this past summer we don't have a clear explanation for."

The Shasta Pack is believed to have killed and eaten a calf in November 2015, the first reported case of livestock predation by wolves since their return to California. That was also the last time the entire pack was known to be together.

Figura said he has no evidence to suggest the wolves were killed in retaliation.

"We detected some tracks and collected some scat and are awaiting DNA analysis," he said. "It could have been a member of the Shasta Pack or a completely different animal. We don't know at this time."