WASHINGTON - Democrats in the House said Wednesday that paid family and medical leave will be placed back into their $1.75 trillion social and environmental spending bill, reviving a key element of President Joe Biden’s agenda and setting up a showdown with a key Senate Democrat who has opposed it.

Biden had reluctantly dropped a scaled-back paid leave proposal from last week's White House framework after Sen. Joe Manchin, D-W.Va., balked at the cost. But Democrats who have lobbied for the leave for decades continued to push for it, and House Speaker Nancy Pelosi announced Wednesday it would be part of the House's massive social spending package.

Bill text set to be released Wednesday is expected to include four weeks of paid time off for people to recover from major illness, childbirth or to care for family members, according to three people familiar with the legislation who requested anonymity to discuss it.

Ways and Means Committee Chairman Richard Neal said in a statement the committee had agreed on a compromise that fully pays for the program.

"The Ways and Means Committee crafted a policy that will finally give workers and their families the peace of mind of knowing that when disaster strikes, they can rely on paid leave to avoid total crisis," Neal said.

The last-minute reinstatement of paid family leave comes as Democrats attempt to craft a final package that can pass both chambers, and as every Democratic vote is needed in the 50-50 Senate. Pelosi wrote in a letter to colleagues that bill text with changes to the overall package is being prepared for a hearing later in the day. House votes could come as soon as this week. 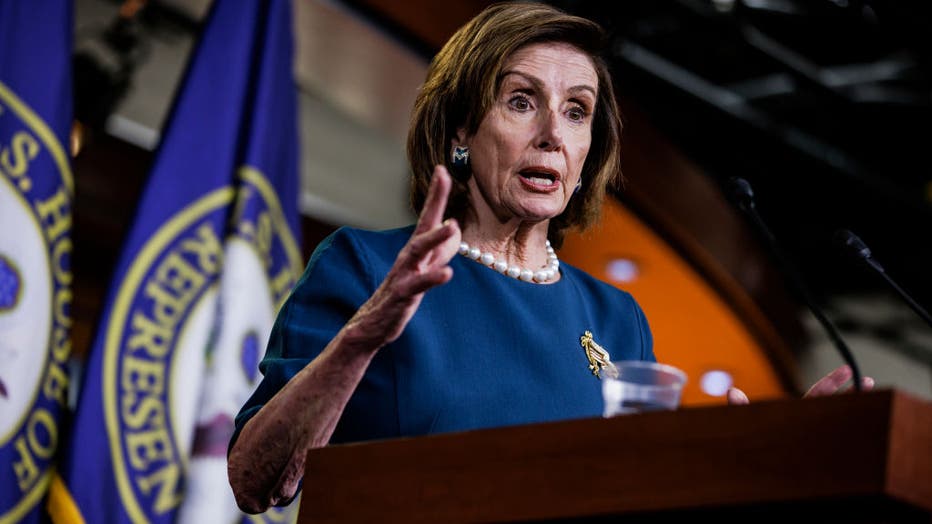 FILE - Speaker of the House Nancy Pelosi (D-CA) holds her weekly news conference in the Capitol Visitors Center at the U.S. Capitol building on Oct. 28, 2021, in Washington, D.C. (Photo by Samuel Corum/Getty Images)

"The hearing will take place today, so that we can bring up the legislation," Pelosi wrote. "Today is another momentous day in our historic effort to make the future better for the American people"

Manchin, who has said Democrats need to take more time in negotiations, said after the paid leave announcement that he "had no idea about that, they just told me," adding that "we should be able to work in a bipartisan way." The bill has faced universal opposition from Republicans.

Democrats on Tuesday reached an agreement on a plan to lower prescription drug costs for most older people, capping out-of-pocket Medicare costs at $2,000 and reducing the price of insulin, salvaging a campaign promise as part of the $1.75 trillion domestic policy proposal.

Senate Majority Leader Chuck Schumer acknowledged it's not as sweeping as Democrats had hoped for, but a compromise struck with one holdout Democrat, Sen. Kyrsten Sinema of Arizona.

Democrats are rushing to overcome party battles and finish a final draft of Biden's plan. Progressive and centrist lawmakers, particularly Manchin and Sinema, have fought over details of the sprawling 1,600-page package.

Schumer said that for the first time, Medicare will be able to negotiate prescription drug prices in its Part B and Part D programs. The $2,000 cap on out-of-pocket costs would benefit those older Americans with the Part D prescription drug benefit, who number some 48 million, Democrats said.

And there would be "a new monthly cap on the price of insulin, and an ‘inflation’ rebate policy to protect consumers from egregious annual increases in prices," Schumer said. The insulin prices would fall from as high as $600 a dose to $35.

The penalties on drug manufacturers for raising prices beyond the inflation rate begin this year.

AARP, the powerful organization for older Americans, signaled support as it waits for details. CEO Jo Ann Jenkins said in a statement there was "no greater issue affecting the pocketbooks of seniors on Medicare than the ever-increasing costs of prescription drugs."

But Pharmaceutical Research and Manufacturers of America president and CEO Stephen J. Ubl said the proposal "gives the government the power to dictate how much a medicine is worth." The pharmaceutical lobby warned it "threatens innovation."

On another issue, Democrats neared agreement on a plan to do away with the $10,000 limit on state and local tax deductions that particularly hits New York, California and other high-tax states and was enacted as part of the Trump-era 2017 tax plan.

While repeal of the so-called SALT deduction cap is a priority for several northeastern state lawmakers, progressives want to prevent the super-wealthy from benefiting. Under an emerging plan, the cap would be repealed from 2021 to 2025, but reinstated from 2027 to 2031, according to a person who requested anonymity to discuss the private talks.

Manchin has been an unreliable partner for Biden's big vision, raising concerns about the president's plans expand health care, child care and other social services and tackle climate change.

A group of House Democrats huddled with the West Virginia senator privately Tuesday at the Senate. He showed no signs of relenting Tuesday, despite widespread criticism over the power of a single senator to hold up the party's signature domestic priority.

"It's going to be a while," Manchin said in brief comments Tuesday at the Capitol.

Rep. Pramila Jayapal, D-Wash., the leader of the progressive caucus said, "I don’t know what Sen. Manchin is thinking, but we are going to pass both bills through the House and we are going to deliver transformative change to the people."

The $1.75 trillion package would provide large numbers of Americans with assistance to pay for health care, education, raising children and caring for elderly people in their homes. It also would provide some $555 billion in tax breaks encouraging cleaner energy and electrified vehicles, the nation's largest commitment to tackling climate change.

Much of its costs would be covered with higher taxes on people earning over $10 million annually and large corporations, which would now face a 15% minimum tax in efforts to stop big business from claiming so many deductions they end up paying zero in taxes.

Some moderate Democrats in the House said they want to see the final assessment from the Congressional Budget Office on its entire budgetary costs, before taking the vote.