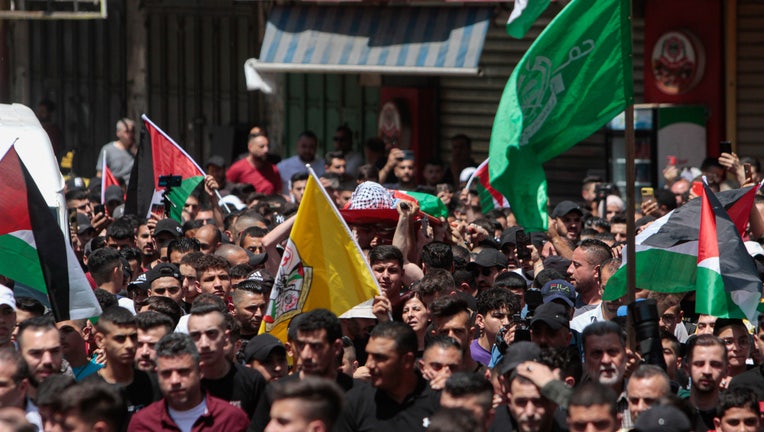 NABLUS, WEST BANK, PALESTINE - 2022/05/25: (EDITORS NOTE: Image depicts death) Mourners carry the body of the 16-year-old Palestinian boy who was allegedly shot in the head by the Israeli armed troops near Joseph's Tomb in the city of Nablus in the o

HAWARA, West Bank - A makeshift sidewalk memorial with a Palestinian flag and a mourning notice paid tribute Saturday to a 22-year-old Palestinian whose death at the hands of an Israeli border police officer — four pistol shots from close range — was captured on widely shared amateur video.

A day after the shooting in the occupied West Bank town of Hawara, Palestinians pushed back against Israeli police claims that Ammar Adili was shot in self defense after he attacked Israelis, including a border policem

an, and resisted arrest.

They said the officer killed Adili without justification, and that Israeli security forces prevented Palestinian medics from trying to save the gravely wounded man as he lay on the sidewalk of a busy thoroughfare.

The 38-second video begins with a tussle between the border police officer and three Palestinians, including Adili, on the sidewalk as traffic rushes by. The officer pulls Adili away in a chokehold and they exchange blows afer Adili frees himself. He tries to grab the officer’s assault rifle, which drops to the ground behind the officer, out of Adili’s immediate reach. The officer then pulls his pistol and fires four shots as an unarmed Adili drops to the ground.

Immediately after Friday’s fatal shooting, police alleged that Adili had carried a knife and tried to attack two Israelis in a car, and then tried to break into the locked vehicle with a rock. It said the driver shot and wounded Adili, who then charged a group of border policemen, stabbing one in the face, police said. The border police officer tried to arrest Adili, who resisted and tried to grab the officer’s weapon, police said. The officer who shot him was not hurt.

Hawara mayor Moein Dmeidy and others on Saturday cited second-hand accounts that there had been an altercation between Adili and an Israeli motorist after a car accident, but Associated Press journalists were unable to find witnesses to the events that led up to the shooting.

Dmeidy said the officer had no justification to kill Adili after he had already overpowered him. Adili was "killed in cold blood," said the mayor, who arrived at the scene moments after the shooting. In a second video, Adili is seen moving and rolling over on the ground after being shot, and it’s not clear at what point he died.

Dmeidy said a Palestinian ambulance arrived minutes after the shooting, but that security forces prevented the medics from administering aid. Dmeidy said Israel has not handed over Adili’s body for burial.

Tor Wennesland, the special U.N. envoy to the Middle East peace process, wrote on Twitter that he was "horrified" by the shooting and sent "heartfelt condolences to his bereaved family." He called for a thorough investigation and said those responsible must be held accountable.

"This incident is a terror attack, in which an Israeli policeman was stabbed in his face and the life of another police officer was threatened and consequently he shot his assailant," Nahshon wrote on Twitter.

On Saturday, shops along Hawara’s main road were shuttered in protest over the shooting.

A makeshift memorial marked the spot where Adili died, consisting of a Palestinian flag on a short pole and a death poster leaning against it. The poster, with a photo of Adili, said the Fatah party of Palestinian President Mahmoud Abbas mourns its son "who was killed at the hands of the Zionist occupation."

The video of Adili’s final moments was a rare documentation of one of the increasingly common violent incidents involving Israeli security forces and Palestinians, including attackers.

The Israeli military said the airstrikes targeted a weapons manufacturing workshop and an underground tunnel belonging to Hamas, the militant group that has controlled Gaza since 2007. The military said more projectiles were fired over the border while warplanes were hitting the Gaza sites.

Rising Israeli-Palestinian tensions have made 2022 the deadliest year in the West Bank and east Jerusalem in the long-running conflict since 2006. Further escalation is likely, as the most right-wing and religious government in Israel’s history is poised to be installed in the coming weeks, with former Prime Minister Benjamin Netanyahu returning to power.

Friday’s deadly shooting came against the backdrop of months of Israeli arrest raids in the West Bank, prompted by a spate of Palestinian attacks against Israelis in the spring that killed 19 people. The military says the raids are meant to dismantle militant networks and thwart future attacks, but the Palestinians say they entrench Israel’s open-ended occupation, now in its 56th year. A recent wave of Palestinian attacks against Israeli targets killed an additional nine people.