MARIN COUNTY, Calif. - A Palo Alto couple that had been missing for more than a week in a tiny community in Marin County was found alive by two search and rescue volunteers and Grute, a 3 year-old search and rescue K-9, Saturday morning.

Volunteers searching a heavily-wooded area located Carol Kiparsky, 77, and Ian Irwin, 72. The two volunteers then made radio contact with authorities. The Sonoma County Sheriff's helicopter, Henry 1, flew the couple out of the dense foliage and to the Inverness general store on Sir Francis Drake Boulevard. An ambulance took them to a hospital to get checked out.

"[They] left for a hike on Valentines, got lost at dark, and don't know what happened," said Sgt. Brendan Schneider with the Marin County Sheriff's office. Authorities told KTVU that the couple was alert and talking. Schneider estimates that 400-500 people participated in the search and rescue operation over the past week.

Carol Kiparsky, 77, and Ian Irwin, 72 before they went missing on Valentines Day.

"Carol and Ian are doing okay. They were suffering from slight hypothermia. The reason they are likely alive is because they drank from a puddle that they found," said Schneider.

Quincy Webster and Rich Cassens, two Marin County search and rescue volunteers, were the ones to discover the missing couple. "We were breaking through the bushes. It took a long time to move a short distance," said Webster.

"When they were found, they were very appreciative. Ian started singing with the helicopter arrived on scene," said Schneider.

The couple was located around 10 a.m. Saturday.

Saturday's search area was new. Officials condsidered it an inplausable spot for the missing couple to be. "It doesn't seem they would have made it much farther because of how dense the vegetation is," said Schneider. "They were very very cold, Quincy put all his gear onto Ian and gave them a little water before they got into the helicopter."

Kiparsky and Irwin were last seen on Valentine's Day, at their Airbnb rented cottage on Via De La Vista road in the community of Inverness.

Authorities had stopped the ground search, to give crews a break, while focusing their attention on the water.

Tracking dogs had picked up a scent along the beach, closest to the cottage.

Officials also brought in a plane, drones, and boats to conduct searches in the air and in the water.

The couple's disappearance was a mystery, since their cellphones and other belongings were still at the cottage

Irwin is a renowned Parkinson's disease researcher, while Kiparsky is a linguist and author. The couple is known to vacation quite a bit and were familiar with the trails in the area. Friends describe them as avid hikers, however Ian had an ankle injury, which meant the two didn't go on long hikes. 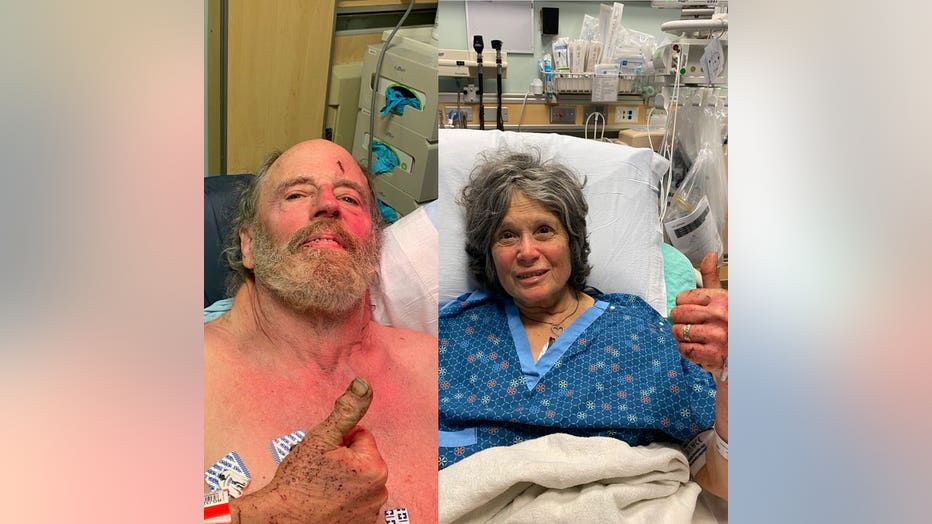 From Marin Sheriff / Twitter: "Update from Carol Kiparsky and Ian Irwin. They are in great spirits and want to thank every single person who has kept them in their thoughts. On behalf of the Irwin and Kiparsky family, Thank You."