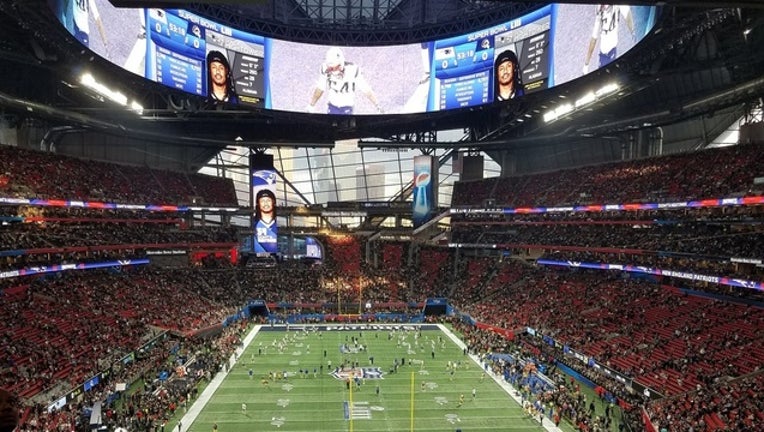 ATLANTA (AP) - Super Bowl LIII between the Los Angeles Rams and the New England Patriots is underway at Mercedes-Benz Stadium in Atlanta.

Here are the latest headlines:

For those who may have dozed off ... the Patriots have won the Super Bowl.

New England topped the Los Angeles Rams 13-3 in a game that dragged the high-def NFL back to the days of black-and-white TV. It was the lowest-scoring Super Bowl in the 53-year history of the game.

Tom Brady captured his record sixth NFL title by throwing for 262 yards, without a touchdown. The Patriots matched the Steelers for most Super Bowl wins, with six.

Julian Edelman caught 10 passes for 141 yards; he was the day's only consistent offensive threat.

Brady engineered the game's lone touchdown drive --a five-play, 69-yard march punctuated by an over-the-shoulder, 29-yard throw into the hands of tight end Rob Gronkowski. On the next play, Sony Michel scored on a 2-yard plunge with 7 minutes to play for a 10-3 lead.

But the real stars of this game were the New England defenders, who smothered Rams quarterback Jared Goff, holding him to 229 yards that felt like less.

After New England's score, Goff moved the Rams down to the New England 28 with 4:30 left. But the third-year quarterback threw one up for grabs near the end zone and cornerback Stephon Gilmore stepped in front for the interception.

The Rams, who averaged 32.9 points a game this season, joined the Miami Dolphins --from Super Bowl 6 in 1972-- as the only the second team not to muster a touchdown in the title game.

The New England Patriots have padded their Super Bowl lead over the Los Angeles Rams with a 41-yard field goal by Stephen Gostkowski. The field goal gave the Patriots a 13-3 lead.

The Patriots worked the clock on a drive covering nine plays and 72 yards, including 26-yard runs by Sony Michel and Rex Burkhead.

Tom Brady and the Patriots finally turned up the offense to end the Super Bowl's longest touchdown drought.

Sony Michel scored on a 2-yard run with 7 minutes remaining to give the Patriots a 10-3 lead over the Rams.

The first Super Bowl without a touchdown through three quarters was in dire need of a boost. Then Brady completed four consecutive passes to set up Michel's touchdown plunge. The drive opened with an 18-yard catch by Rob Gronkowski, who added a 29-yard diving catch at the 2.

Brady also completed passes to Julian Edelman and Rex Burkhead during the drive.

The Rams finally have scored, but the longest touchdown drought in Super Bowl history continues.

Greg Zuerlein kicked a 53-yard field goal late in the third quarter to allow the Rams to pull even with the Patriots at 3-3.

The big play of the Rams' scoring drive was Jared Goff's 18-yard pass to Robert Woods on a third-and-7 play. The Rams had been stopped on their first eight third-down plays of the game.

Patriots safety Patrick Chung has suffered a right arm injury that knocked him out of the Super Bowl early in the third quarter.

Chung suffered the injury when his right arm was caught between teammate Jonathan Jones' helmet and Rams running back Todd Gurley's helmet on a tackle.

While still on his back, Chung pounded the turf in frustration. His arm was placed in a black air cast. The Patriots announced Chung will not return to the game.

A cart came out, but Chung walked off the field for the Patriots locker room with the cart trailing behind.

The expected Super Bowl slugfest is a snoozer at halftime.

New England leads Los Angeles 3-0 on a 42-yard field goal by Stephen Gostkowski, making for the second-lowest scoring first half in the game's history. Only Pittsburgh's 2-0 halftime lead over Minnesota in the 1975 Super Bowl -- won by the Steelers, 16-6 had fewer points.

Denver was the previous team to go scoreless during the Super Bowl in 2014 against Seattle.

New England dominated in time of possession, holding the football for 19 minutes, 52 seconds, while Los Angeles had it for 10:08. The Patriots also outgained the Rams in total yardage 195-57.

Tom Brady, seeking his sixth Super Bowl win, was 15 of 25 for 160 yards and an interception. Julian Edelman was his main target, catching seven passes for 93 yards.

Jared Goff was 5 of 12 for just 52 yards as the Rams were 0 for 6 on third downs. Star running back Todd Gurley had only 10 yards rushing on three attempts.

Stephen Gostkowski kicked a 42-yard field goal to give New England a 3-0 lead over the Los Angeles Rams with 10:29 left in the first half of the Super Bowl.

The Patriots kicker missed a 46-yard attempt late in the opening quarter, but made up for it by capping New England's seven-play, 39-yard drive with the first points of the game.

Julian Edelman, who had two catches for 31 yards on the drive, passed Dallas' Michael Irvin for the second-most receiving yards in NFL postseason history. Only Jerry Rice has more than Edelman.

New England's Tom Brady was sacked in the playoffs for the first time this postseason, going down when Los Angeles' John-Franklin Myers knocked the ball out of the quarterback's hands late in the first quarter of the Super Bowl.

It was the first time Brady was sacked in a postseason game since last year's Super Bowl loss to the Philadelphia Eagles. Brandon Graham ripped the ball out of Brady's hands for a fumble that was recovered by Derek Barnett -- sending the Eagles to their first Super Bowl title in franchise history with a 41-33 victory.

The game remained scoreless through the first quarter.

New England, which had the ball for 11 minutes and 47 seconds, still hasn't scored a touchdown in the opening quarter in its past nine Super Bowls. The Patriots have been outscored 24-3 in those games -- with the only points coming on a field goal by Stephen Gostkowski last year against Philadelphia.

Stephen Gostkowski was wide left on a 46-yard field goal attempt that would have given New England the early lead in the Super Bowl against the Los Angeles Rams.

It also marked the first missed kick by any NFL kicker this season in Mercedes-Benz Stadium, the home of the Atlanta Falcons.

After the Patriots' first offensive possession ended in an interception by Tom Brady -- just the second on the opening drive of a playoff game in the quarterback's career-- the Rams went three-and-out.

New England got the ball at its 12, and questionable officiating quickly became an issue when Rams cornerback Nickell Robey-Coleman was penalized for hitting a defenseless receiver after Brady's pass to Rex Burkhead on second-and-14 went for a 4-yard loss.

Instead of third-and-18 from the Patriots 16, New England got a first down at the 35. Brady then marched the offense down the field -- only to see the usually reliable Gostkowski miss.

Robey-Coleman was involved in the now-infamous play during which he was not penalized for his hit on Saints receiver Tommylee Lewis. No flag was thrown for pass interference for the helmet-to-helmet nature of the hit -- for which Robey-Coleman was fined $26,739 by the NFL -- possibly altering the outcome of Los Angeles' 26-23 overtime victory.

Los Angeles has won the coin toss -- but will start the Super Bowl on defense.

New England special teams standout and captain Matthew Slater called heads and the coin turned up tails -- but the Rams deferred, giving Tom Brady and the Patriots the ball first.

The Patriots, behind coach Bill Belichick and quarterback Tom Brady, are back in the Super Bowl for the third straight year looking for their sixth Lombardi Trophy.

The Rams, whose past two Super Bowl trips were representing St. Louis in 2000 and `02, have four players who have gotten to the big game. They'll rely on quarterback Jared Goff and coach Sean McVay, the youngest Super Bowl head coach at 33.

The Rams' past two trips to the big game were tight affairs in which they beat Tennessee and lost to New England. In all of the Patriots' eight previous trips in the Brady-Belichick era, the result was in doubt until the final moments.

The largest margin in a Patriots Super Bowl under this regime has been the eight points the Eagles beat them by a year ago.

The Super Bowl teams had no surprises on their lists of inactive players.

Defensive tackle Danny Shelton and defensive end Deatrich Wise Jr. both returned to the Patriots' active roster after missing the AFC championship game. Also active were linebacker Dont'a Hightower, who missed a practice this week with an illness, and defensive lineman Malcom Brown, who was limited with a calf injury.

The Rams had no roster decisions to make with no significant injuries. Running back Todd Gurley, kicker Greg Zuerlein and defensive back Blake Countess were all ready to go after being cautious in recent practices.

Is Gladys Knight going to hit some long notes today? If so, there could be money to be made.

The over-under for Knight's rendition of the national anthem is set at 110 seconds by Bovada -- one of many side-action wagers available for today's Super Bowl, the most heavily bet event of the year.

The color of the first bag of Doritos featured during a Super Bowl commercial? The favorite is red at 3-2.

If you believe President Trump's tweet count will be higher than the number of Tom Brady touchdown passes, then you can wager $140 to win $100.

The NFL has announced plans for Mercedes-Benz Stadium's retractable roof to be open for the pregame show, including a flyover by the Air Force Thunderbirds, and then closed for the game.

NFL spokesman Brian McCarthy says the plan is to have the roof closed for the teams' pregame warmups on the field. The retractable roof then will open for the pregame ceremony.

McCarthy says the plan could be affected by a change in weather.

The Thunderbirds practiced the flyover with the roof open on Saturday night as close as possible to the planned time for Sunday's pregame show.

There was scattered rain in Atlanta on Sunday morning. The forecast called temperatures in the 50s for the start of the game at 6:30 p.m.