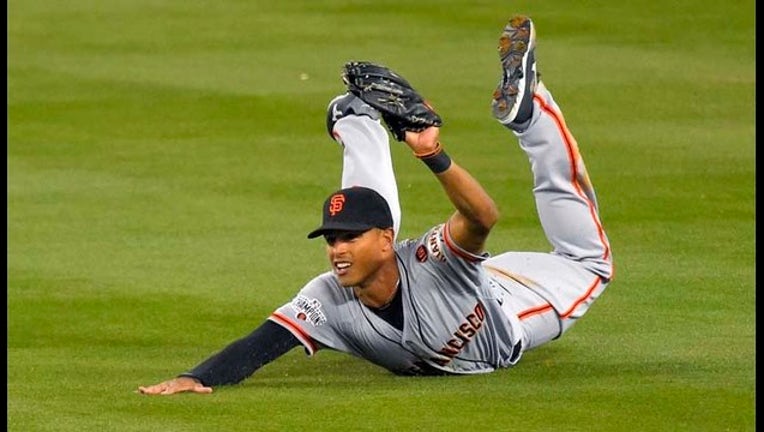 LOS ANGELES (AP) — Rookie center fielder Joc Pederson's teammates are enjoying the many ways he can impact a ballgame, and he did it again Monday night against the San Francisco Giants.

Pederson homered, doubled in a run and made a sparkling defensive play to lead the Los Angeles Dodgers to an 8-3 victory over the defending World Series champions.

The game got off to an auspicious start defensively for the Dodgers. Nori Aoki was off and running on Angel Pagan's drive to the warning track and was already past second base when Pederson made an over-the-shoulder catch on the run and easily doubled Aoki off first with the help of shortstop Jimmy Rollins' relay.

"That was a Gold Glove-caliber play, to catch the ball and then fire a strike to the relay man to get Aoki at first," starting pitcher Brett Anderson said. "He's made a couple of those plays behind me already, and also threw a guy out at the plate. He's been tremendous."

Anderson failed to go the required five innings for a win after his teammates staked him to a 4-0 lead. Carlos Frias (1-0) relieved with two outs in the fifth and was credited with his second major league victory after pitching 1 1-3 innings and retiring Justin Maxwell on a comebacker with the bases loaded to end the Giants' three-run fifth.

"Fortunately, we got the win. But from my perspective, it's frustrating because these guys handed me a four-run lead," Anderson said. "I was able to get a shutdown inning after that, but then I wasn't able to prolong it.

"I could have saved the bullpen a little bit and not used those guys. I've got to do better — either make them hit it hard at somebody or make better pitches to get swings and misses. But some adjustments have to be made."

Tim Lincecum (1-2) gave up four runs, eight hits and three walks over four innings before he was lifted for a pinch hitter. The two-time NL Cy Young Award winner's fourth start of the season was delayed a day because of Sunday's rainout in Colorado.

"It didn't affect me," Lincecum said. "You've just got to lock in again. You know that day is over and you've got to move on to the next opponent. You go and study them, just like you would any other game. So it wasn't a factor."

Pederson's homer came in the sixth inning against George Kontos, and pinch-hitter Justin Turner added a three-run shot in the eighth off Yusmeiro Petit.

Howie Kendrick had an RBI single, then stole second, and Adrian Gonzalez scored when the throw from catcher Andrew Susac went into center field for an error. Scott Van Slyke singled as a pinch hitter for Carl Crawford, who exited with tightness in his right side, and the Dodgers capped the rally with Juan Uribe's RBI single and Pederson's run-scoring double.

"I was missing over the middle of the plate too much. And regardless of the ball being down or up, I'm missing on the sides of the plate that I shouldn't be missing on," Lincecum said. "Walks are going to kill you in situations like that. I started off the inning with a walk, and it just kept getting worse. It always comes down to the leadoff batter and getting him out. That changes the whole inning."

Anderson retired his first two batters in the fifth before giving up a walk to No. 8 hitter Brandon Crawford, a single by pinch-hitter Hector Sanchez, an RBI single by Aoki and a run-scoring double by Joe Panik on Anderson's 74th and final pitch.

The left-hander was charged with three runs and five hits in 4 2-3 innings.

Pagan greeted Frias with a run-scoring infield hit that was smothered by second baseman Kendrick, preventing Panik from scoring the tying run. Frias then retired Maxwell to preserve a one-run lead.