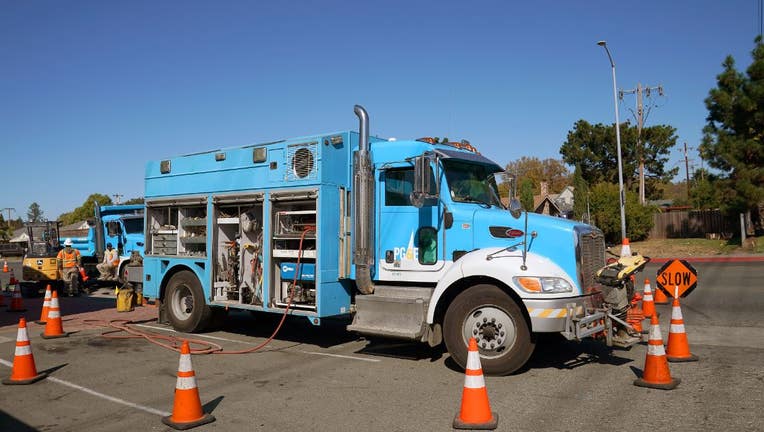 Pacific Gas & Electric crews work on October 09, 2019 in Vallejo, California. PG&E plans on cutting power to hundreds of thousands of customers across central and northern California as a precaution against starting wildfires as low humidity (Photo by Thearon W. Henderson/Getty Images)

SAN FRANCISCO - PG&E Corp. announced in San Francisco Wednesday it has reached an agreement with a group of bondholders that had a competing plan for the utility's financial reorganization and exit from bankruptcy court.

Under the agreement, the bondholders will withdraw their proposal and support PG&E's plan, known as the Restructuring Support Agreement, if U.S. Bankruptcy Judge Dennis Montali approves the plan.

PG&E, which faced billions of dollars in wildfire claims, is currently in Chapter 11 bankruptcy, which allowed it to freeze its debts while developing a financial reorganization plan.

The plan includes settlements of $13.5 billion for wildfire victims with uncompensated claims, $11 billion for insurance companies that have paid claims and $1 billion to cities, counties and other public entities for wildfire costs.

Chapter 11 as the utility of the future that our customers and communities expect and deserve."

Montali is scheduled to hold a hearing on the case in his San Francisco courtroom on Jan. 29.

The pact moves PG&E a step closer to being able to exit bankruptcy by a June 30 deadline to be eligible for a new state wildfire insurance fund that would be paid for by a combination of investor-owned utilities and utility customers.

But in another development Wednesday, Gov. Gavin Newsom said in a bankruptcy court filing that he believes the utility's plan doesn't meet the requirements of AB 1054, the state law that created the wildfire insurance fund.

He said the plan needs changes in governance, management and financial structure to enable PG&E to make critical safety investments.

Without those changes, Newsom warned, "the governor is pursuing strategies to protect California's interests through further intervention, including a state takeover of the utility."

State Sen. Bill Dodd, D-Napa, stated, "Gov. Gavin Newsom is absolutely right to object to PG&E's flawed plan. It's clear that while PG&E and its hedge fund backers are acting with narrow self-interest, the governor and the Legislature are going to continue to fight for the public's interest."

The $13.5 billion victims' fund in the plan now agreed to by PG&E and the bondholders would compensate victims of Northern California wildfires
between 2015 and 2018 that were caused or allegedly caused by failures in PG&E electrical equipment.

In another bankruptcy court filing today, court-appointed Claims Representative Michael Kasolas, who was assigned to locate fire victims and help them with claims, reported that 81,131 individuals and entities filed claims by a Dec. 31 deadline. Kasolas said 9,265 were added to the list after Montali extended the deadline from Oct. 21 to Dec. 31.