Auditors found the utility company did not properly track unspent money meant for putting power lines underground. Pacific Gas and Electric said, prior to 2017, the company was allowed to reallocate unspent funds.&nbsp;

SAN FRANCISCO - Pacific Gas & Electric (PG&E) power lines contacting trees and other objects is the most common cause of fires involving PG&E equipment, according to data provided by the utility's regulator and analyzed by KTVU.

This leaves many wondering: Why aren't more power lines underground?

Part of the answer to that question lies in an independent audit of PG&E's Rule 20A program -- commonly known as undergrounding -- obtained by 2 Investigates. In the final report released October 15, independent auditors AzP Consulting determined PG&E showed signs of "fraud risk factors" after looking into the company's management of millions of unspent dollars meant for power line undergrounding projects in Central and Northern California.

PG&E told 2 Investigates the company "disagrees with [the audit's] suggestion of fraud in the Rule 20A program." According to a spokesman, the utility's regulator, the California Public Utilites Commission (CPUC), gave PG&E discretion to reallocate funds.

After a nearly year-long process, auditors found, between 2007 and 2016, PG&E underspent approximately $123 million meant for undergrounding, meaning the utility either did not spend the funds or used management discretion to divert the money to projects unrelated to undergrounding. PG&E previously told 2 Investigates the diverted money went to other "high-priority" projects, but the utility never specified what those projects were.

While PG&E maintains undergrounding power lines is for neighbornood beautification, not for safety, some cities disagree saying undergrounding improves safety by removing the overhead wires that may arc or be brought down during storms. 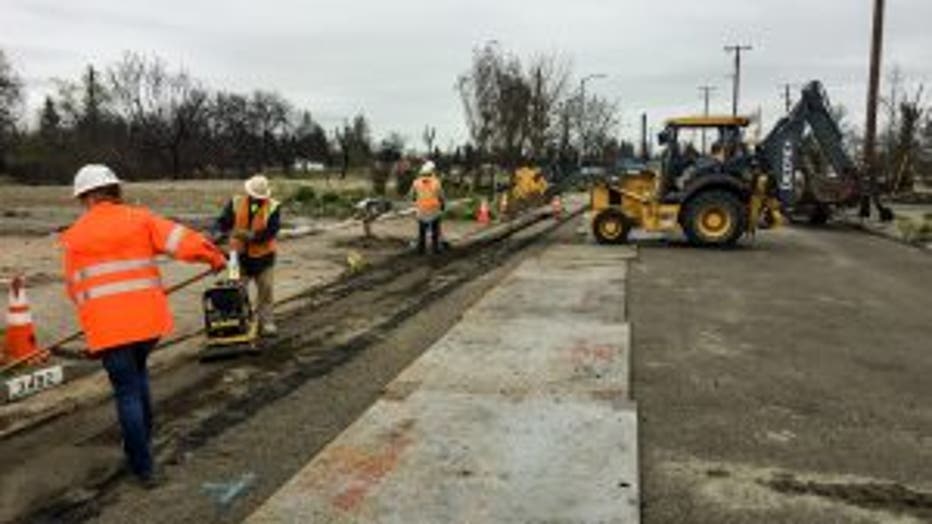 There is no way of knowing how much undergrounding money PG&E reallocated or where it went because the company did not track the re-directed funds, said auditors. PG&E's handling of its undergrounding program was so poor, auditors said, it was "indicative of fraud risk factors," especially when it came to the company's forecasting methods.

"It is impossible to determine with precision where the funds were spent."

"[The auditors'] suggestion of fraud appears to be based on a flawed understanding of the CPUC's ratemaking process," PG&E spokesman Paul Doherty wrote.

Prior to 2017, the CPUC ratemaking process allowed PG&E to reallocate unspent city and county undergrounding funds. In 2017, the City of Hayward worked with the CPUC's Energy Division to ensure PG&E fully accounts for its undergrounding budgeted amounts and cities receive the full benefits of their earned funds. As a result, PG&E implemented a "one-way balancing account" to track the unspent money. Currently, any unspent undergrounding funds must rollover into accounts exclusively designated for undergrounding.

"PG&E has a bad history of taking money, tree trimming, undergrounding, money to replace gas lines and spending it on something else. Then we have big wildfires and the San Bruno explosion," Mark Toney said. Toney is the executive director of The Utility Reform Network.

"That has to stop. We have to hold PG&E accountable," Toney said.

PG&E said undergrounding projects are expensive, complex and mainly for neighborhood aesthetics, not to make them safer. Doherty said the company is always looking for areas to improve and is reviewing the auditors' 50 recommendations, which include:

Fire survivors like Suzanne Kozel, who escaped the 1991 Oakland Hills Firestorm, said she feels PG&E is taking advantage of ratepayers.

"Our bills are astronomical no matter how hard we try to keep the heat down and lights off," Kozel said. "To think all that money we're paying out is not going to the improvements necessary is really horrible."

While PG&E is the subject of this latest audit, Toney said eyes should also be on the CPUC because the commission is ultimately responsible for regulating utility companies.

"The problem with PG&E is they have not been held accountable. Not just for undergrounding but for anything else having to do with safety." Toney said.

The CPUC told 2 Investigates it is reviewing the audit and may take further action against PG&E. The regulator is able to investigate and fine PG&E. The CPUC also working with an administrative judge and other parties to improve the utility company's undergrounding program as a whole.

Now it is PG&E's responsibility to file a response with the CPUC. PG&E said it has not had time to officially respond to the final report as of publication of this story.