Pacific Gas and Electric’s CEO told members of a democratic committee that Public Safety Power Shutoffs will continue for at least the next five years. On Friday the utility said they've reached a tentative agreement to raise customers' bills by about $5 to pay for safety improvements.

WASHINGTON - Pacific Gas and Electric’s CEO told members of a democratic committee that Public Safety Power Shutoffs will continue for at least the next five years.

Bill Johnson testified Thursday before the U.S. Senate Energy and Natural Resources Committee in Washington D.C. He was asked about tools to prevent wildfires, including the power shutoffs.

Johnson pointed to San Diego’s electric utility killing the power to customers for more than 12 years, despite efforts to systematically select a small number of residents.  He estimates another five years of power shutoffs will be required before all of the upgrades are in place to prevent wildfires using other tools.

PG&E entered bankruptcy following a series of fires in 2017 and 2018, many of which were blamed on the company’s equipment. Despite efforts to fix the company, Governor Gavin Newsom has held a hard line, rejecting an initial settlement to compensate wildfire victims of the North Bay Fires and the Camp Fire in Paradise. There has also been talk of breaking up the company and selling it off in pieces. 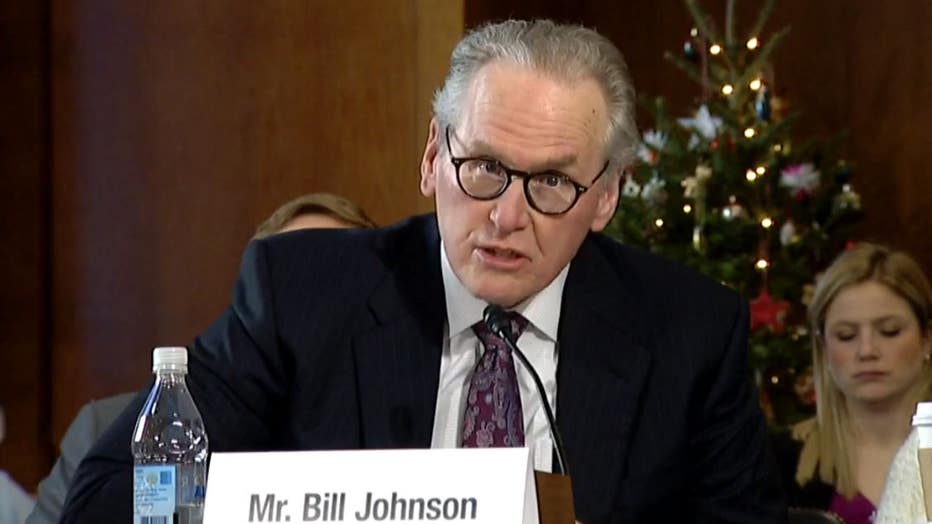 “There’s still a lot of work and who the eventual owner is will be determined by the bankruptcy court,” Johnson explained. “But at least in my mind, the most important thing has happened, which is we have made amends with the people who are affected by these fires.”

PG&E has been criticized for not effectively maintaining its electrical grid and system. Specifically, investing in new technologies and replacing decades-old parts and equipment.

PG&E admitted that it knew of concerns surrounding C-hooks, a piece of hardware that was extremely worn, rusted and broken, causing an energized line to dangle and ultimately spark the Camp Fire in Butte County.

PG&E records show two additional failures of those C-hooks in the 10 years before the Camp Fire, according to the federal filing. The utility also acknowledged it knew of concerns surrounding the hooks on another set of transmission lines more than 30 years ago. Testing was recommended, however, there’s no evidence that happened.

Johnson, who has been the CEO for less than a year, reassured committee members that work is being done to prevent fire, harden lines and improve the electric grid.

“This year alone we inspected every asset in the high fire district and repaired what needed repaired on a priority basis,” he said. “We are sort of operating on all fronts to make this system safer and more resilient.”