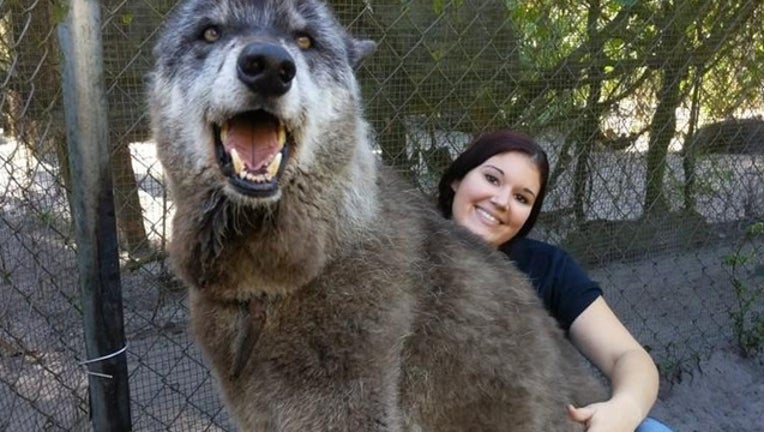 NAPLES, Fla. (FOX 13) - An eight-month-old pup was brought to a kill shelter because his owner had been diagnosed with a tumor and the pup was getting too big and too much to handle, a sanctuary says. It turned out that pup was 87.5% Gray Wolf, 8.6% Siberian Husky, and 3.9% German Shepherd.

That happened in 2008, and since then, photos of the sheer size of the wolfdog named "Yuki" have gone viral.

Yuki was given a second chance at life through the Shy Wolf Sanctuary in Naples, Florida, which is not only a refuge for wolves and wolfdogs, but also for a wide range of other animals from cougars to Florida gopher tortoises and bobcats.

Yuki's photo went viral after it was posted by volunteer, Brittany Allen, on social media showing the huge wolfdog alongside her who appeared to be twice her size. Allen is 5 feet, 4 inches tall and told Bored Panda he's not actually as large in real life as the photo, but the photo is not photoshopped.

She also responded to comments of users on Instagram who said the photo must be doctored with: "The face we make when people say Yuki’s picture is Photoshopped… It’s just his fat angle guys. We all have one.”

"Yuki is very much a 'ham' and loves to be the center of attention," the sanctuary says. He also has a wild side and a number of triggers, but volunteers know his body language and are able to read him well and react quickly, the sanctuary says.

For those who have asked, the sanctuary says Yuki is not up for adoption. "I am 12 years old and terminally ill so I will be staying at Shy Wolf with my pack friend Belli in our enclosure," the sanctuary posted, but said Yuki can be sponsored by anyone who wants to.