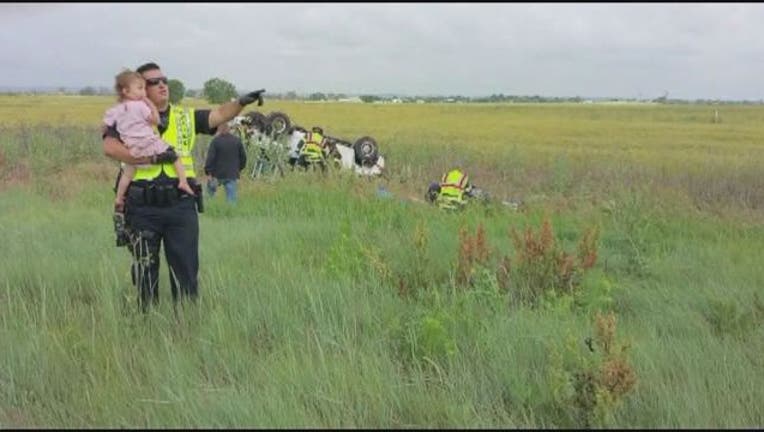 BRIGHTON, CO- A precious moment, was captured in a photograph that's now getting worldwide attention.

It was taken at the scene of a deadly crash last week in Colorado.

It shows how a police officer used his skills as a father to calm the fears of a frightened little girl.

It's a picture that captures the heart of police work.

Brighton Officer Nick Struck was on patrol last Thursday when he was dispatched to a fatal accident near I-76 and Buckley.

A father of four died instantly in the crash. The mother and three of the four young children were injured.

Paramedics worked to save them, and they handed the fourth child, a two year old girl to Nick.

"She was crying she was soaked in gasoline from the truck the smells, it was really awful," Struck said.

The way she fit into his arms reminded him of his own two-year old daughter.

Jessica Matrious, who saw the accident and stopped to help, took the picture.

"He was trying to keep her from watching what was going on behind her," Jessica explained.

She says you could see the toddler relax as the officer softly sang to her.

"She put her arm around my shoulder just like my daughter does and that's really when the emotions started kicking in," Struck said.

Matrious tweeted the picture, and it's been tweeted and retweeted thousands of times, literally posted now, all over the world.

"It's humbling, that's for sure," Struck said.

Nick says what he did, is no different than what any other officer would do.

"It's kind of a little glimpse, but it really does happen all the time," Struck said.