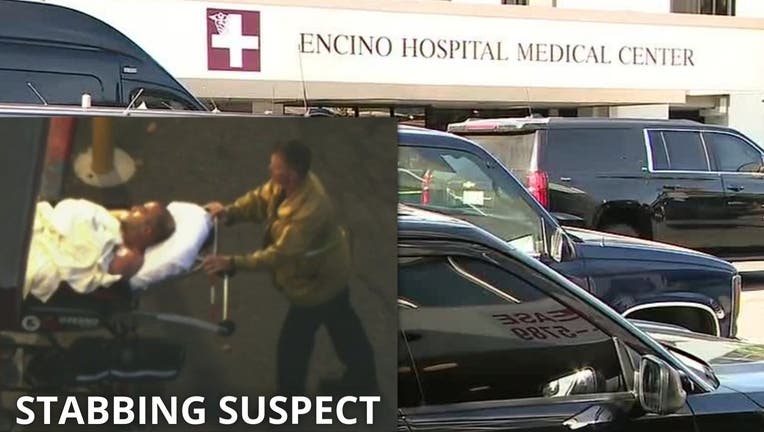 LOS ANGELES - Police on Saturday identified the man who allegedly stabbed a doctor and two nurses inside a Southern California hospital emergency ward and remained inside a room for hours before police arrested him.

Ashkan Amirsoleymani, 35, has been booked on three counts of attempted murder related to Friday's attack, the Los Angeles Police Department said on Twitter.

He is being held on $3 million bail. It was not immediately clear on Saturday morning whether he had an attorney who could speak on his behalf.

He had parked his car in the middle of a street and went to the emergency room, where he asked for treatment for anxiety before stabbing the doctor and nurses, authorities said.

All three were later listed in stable condition at Dignity Health Northridge Hospital Medical Center. The hospital did not immediately respond to a request for comment Saturday morning.

The first floor of the Encino hospital and some nearby offices were evacuated, police said.

There was no evidence that the man -- later identified as Amirsoleymani -- knew the victims, LAPD Deputy Chief Alan Hamilton said at a news conference Friday

He remained inside a room in the hospital for about four hours as SWAT team members tried to unsuccessfully to negotiate with him before he was finally arrested, police said.

He was taken to another hospital for treatment of self-inflicted injuries to his arms, authorities said.

Hamilton said he had a lengthy criminal record, including two arrests last year for battery of a police officer and resisting arrest.

Benjamin Roman, an ultrasound technician, told KNBC-TV that before the stabbing, he saw the suspect, who had a dog with him and who might have been high on drugs because he looked anxious and was drenched in sweat.

After the hospital issued an "internal triage" code, Roman said he saw a doctor and a nurse who had been stabbed.

"The doctor looked (like) she was in pain," he said. "There was a lot of blood and it looked like ... he might have got her abdomen."

The attack came only two days after a gunman killed four people and then himself at a hospital in Tulsa, Oklahoma. The assailant got inside a building on the Saint Francis Hospital campus with little trouble, just hours after buying an AR-style rifle, authorities said.

The man killed his surgeon and three other people at a medical office. He blamed the doctor for his continuing pain after a recent back operation.