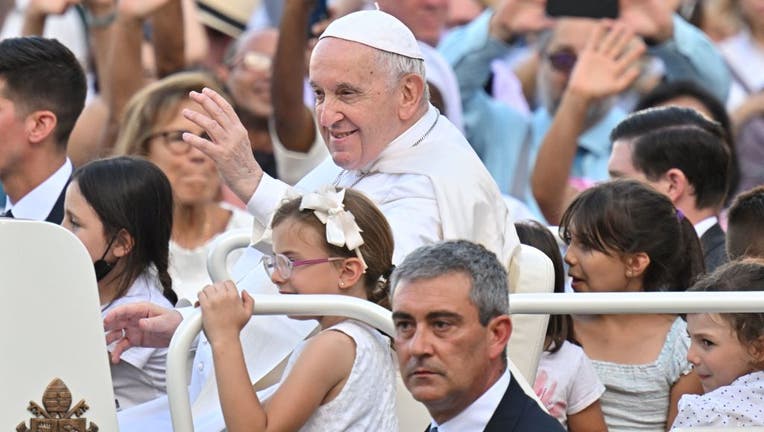 Pope Francis arrives to lead the mass for the 10th World Meeting of Families in Saint-Peter square on June 25, 2022 at the Vatican. (Photo by Alberto PIZZOLI / AFP) (Photo by ALBERTO PIZZOLI/AFP via Getty Images)

ROME (AP) - Pope Francis celebrated families Saturday and urged them to shun "selfish" decisions that are indifferent to life as he closed out a big Vatican rally a day after the U.S. Supreme Court ended constitutional protections for abortion.

Francis didn’t refer to the ruling or explicitly mention abortion in his homily. But he used the buzzwords he has throughout his papacy about the need to defend families and to condemn a "culture of waste" that he believes is behind the societal acceptance of abortion.

"Let us not allow the family to be poisoned by the toxins of selfishness, individualism, today’s culture of indifference and waste, and as a result lose its very DNA, which is the spirit of welcoming and service," he said.

The pope, noting that some couples allow their fears and anxieties to "thwart the desire to bring new lives in the world," called for them not to cling to selfish desires.

"You have been asked to not have other priorities, not to ‘look back’ to miss your former life, your former freedom, with its deceptive illusions," he said.

Francis has strongly upheld church teaching opposing abortion, equating it to "hiring a hitman to solve a problem." At the same time, he has expressed sympathy for women who had abortions and made it easier for them to be absolved of the sin of undergoing the procedure.

RELATED: State by state: Where abortion will be illegal after Supreme Court Dobbs v. Jackson ruling

The Catholic Church holds that life begins at conception and must be protected and defended until natural death.

Francis delivered his homily in a packed St. Peter’s Square at the end of the World Meeting of Families, a four-day conference held every few years aimed at helping church workers provide better pastoral care for families, especially those in difficulty.

The head of the Vatican’s laity office, Cardinal Kevin Farrell, celebrated the closing Mass before tens of thousands of people given Francis has a bad knee that makes it difficult for him to stand for long periods of time.

The pope instead sat to the side of the altar and delivered the homily seated, though he was able to stand up easily for the reading of the Gospel and other moments with the help of a cane.

The Vatican welcomed Friday’s ruling overturning Roe v. Wade, the 1973 decision that provided constitutional protections for abortion in the U.S. The move opens the doors for individual states to ban or restrict abortion access, with bans now expected in about half the U.S. states.

The Holy See’s main bioethics body, the Pontifical Academy for Life, said it "challenges the whole world" to reopen debate about the need to protect life. Abortion is legal in Italy and most of Europe.

In an editorial Saturday entitled "For Life, Always," the Vatican’s editorial director, Andrea Tornielli, called for that debate to move away from polarized ideology to a dialogue that takes into account concerns about maternal mortality rates and helping women, especially poor ones, with paid parental leave and other assistance when they bring children into the world .

"Being for life, always, also means defending it against the threat of firearms, which unfortunately have become a leading cause of death of children and adolescents in the U.S.," Tornielli wrote.

Farrell, in his closing remarks at the end of the Mass, thanked Francis for his many initiatives in favor of families, citing in particular his teaching on the value of grandparents and his "many pronouncements in defense of life."