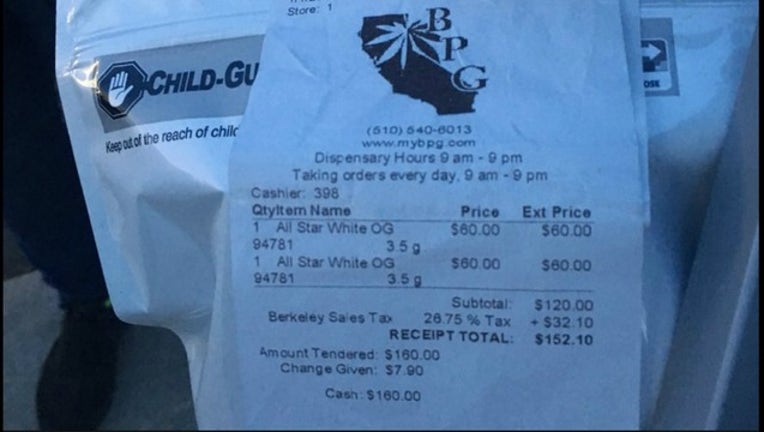 A customer shows his receipt for recreational marijunana in Berkeley.

OAKLAND, Calif. - With recreational cannabis now legal, some buyers are experiencing sticker shock when it comes to pot taxes.

In some communities, state and local taxes have ballooned to 45 percent for recreational marijuana, but because rates vary from city to city, county to county, the new taxes have created a whole lot of confusion among customers.

Whether you’re buying recreational or medicinal cannabis, the exact final price depends on your store’s local sales taxes and whether it raises prices to match new costs in the supply chain.

If confusion about taxes isn’t enough, information about just where that new money –potentially $1 billion statewide -will go has also been murky.

Here’s a quick look at the new taxes followed by a breakdown of where money generated from the new fees will go:

For example, San Jose, Oakland and Berkeley all have a local tax of 9.25 percent while the local tax in San Francisco is 8.5 percent. Medicinal marijuana patients who hold a valid Medical Marijuana Identification Card are exempt from paying sales tax.

Cities can add on local “cannabis business taxes as well, according to Paul Cambra, a spokesman for the California Department of Tax and Fee Administration.

While governments struggling to keep up with the cost of everything from worker pensions to paving streets are eager for the cascade of new tax money from commercial pot sales, some worry the new high taxes may send people back to the black market for weed.

The credit agency report says that Colorado, Oregon and Washington all reduced tax rates after the pot became legal to shift buyers back toward the legal market.

Steve DeAngelo, the the-co-founder and executive director at Harborside in Oakland, said he doesn’t think the current tax rate for cannabis in California is sustainable.

“Because we have a very robust market in California, almost everyone knows someone down the street where the cost of cannabis is considerably lower,’’ he said.

DeAngelo anticipates that 30 to 40 percent of customers will go back to the black market if taxes remain high.

“People are really really thrilled to have the legal cannabis experience but they are dismayed to find out that it’s going to cost them much more than the illegal experience. ----

So where does all this tax money go?

First, the revenue will be used to cover costs of administrating and enforcing the measure. Next, it will be distributed to drug research, treatment, and enforcement.

For example, $3 million annually for five years will go to the Department of the California Highway Patrol for developing protocols to determine whether a motorist is impaired due to marijuana consumption.

The remaining revenue will be distributed to youth programs, including drug education, prevention, and treatment, environmental mitigation from damage done by illegal marijuana producers, and a program designed to reduce negative impacts on health or safety resulting from the proposition.