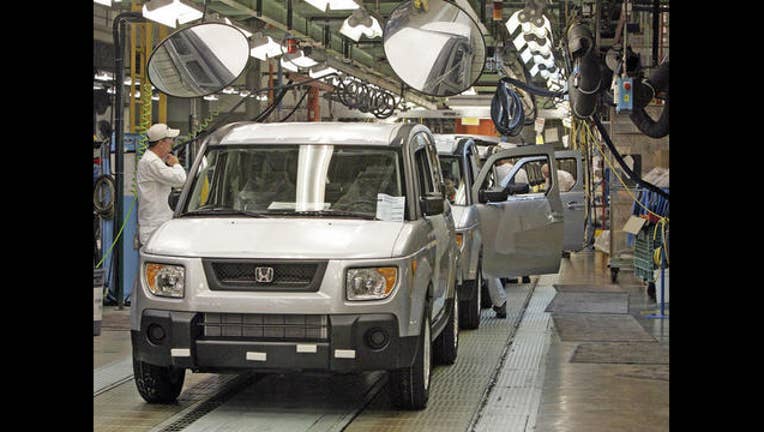 Honda Elements are being assembled at a Honda plant Wednesday, May 24, 2006 in East Liberty Ohio. (AP Photo/Kiichiro Sato)

DETROIT (AP) -- President Donald Trump's relentless push for more manufacturing jobs has forced the auto industry into a delicate dance of contradictions in order to keep him happy, tell the truth, and avoid alienating customers in both red and blue states.

Toyota did the waltz with Monday's announcement that it would spend $1.33 billion to retool its gigantic factory in Georgetown, Kentucky, an investment in the heart of Trump country that has been planned for years.

Trump wasn't included in a company statement sent on Friday in advance of the announcement, but  Kentucky's governor and both of the state's U.S. senators were quoted. In a paragraph added Sunday evening, Trump claimed credit for the investment, saying it is "further evidence that manufacturers are now confident that the economic climate has greatly improved under my administration."

The company said the Trump quote was added at the administration's request, but the White House said Toyota requested it and pointed to a poll of manufacturers showing record optimism. Later Monday, Toyota said that it had asked the White House for a Trump quote.

Either way, an investment of that size takes years to plan, and Toyota confirmed that it's been in the works four or five years, long before Trump was elected. The company is switching its midsize Camry sedan, long the top-selling car in America, to new underpinnings that make it more modern and fun to drive. Although the investment doesn't add jobs, it sustains 8,200 workers at the plant, which also manufactures the Toyota Avalon and Lexus ES 350 cars.

The dealings with Toyota show how businesses -- especially automakers whose brands cater to both ends of the political spectrum -- must tread carefully when dealing with Trump or other politicians. Depending on their response, they run the risk of angering a president who has authority to regulate their industry or alienating customers who are on both sides of the political divide.

"That's kind of the reality of the situation you're operating in," said Joseph Holt, a University of Notre Dame associate professor who specializes in business ethics and leadership. "I think it's a shame that they have to do this dance, but I understand why they're doing it."

All politicians play the same game as Trump, taking credit for accomplishments they had nothing to do with, said Erik Gordon, a business professor at the University of Michigan. What makes Trump unique is the demand for jobs announcements was done publicly rather than in private conversations, Gordon said.

Many CEOs grudgingly supported President Barack Obama's health care plan even though they disagreed with it, Gordon said.

"With President Trump, the difference is the volume is up to 11 or 12 instead of at 10," he said. "I don't find him to be that different in terms of what he wants credit for, and putting the arm on people to get on his program, other than he does it publicly."

Detroit automakers are in the most precarious position, Gordon said, because they are perceived as more American. Take General Motors. Its Chevrolet brand, with the top-selling Silverado pickup truck, caters largely to America's mid-section, which largely voted for Trump. But GM's Cadillac luxury brand wanted so much to distance itself from the Midwest that it moved its offices to Manhattan, which supported Democrat Hillary Clinton.

If GM either confronts Trump or is continually in his Twitter sights, that could upset the automaker's lucrative customer base in the Midwest. If the company is too supportive, it could hurt GM's efforts to grow Cadillac sales on the mostly blue coasts.

That's why with few exceptions, GM, Ford and Fiat Chrysler have made jobs announcements that largely were in the works long ago, Gordon said.

Because the country is so politically polarized, a social-media fueled PR mistake for or against an issue could touch off a boycott that can quickly hurt a company, Gordon said.

"Now the companies are really under the magnifying glass," he said. "Many customers want to know who you are and what you stand for before they even think about your product."

Holt and others say companies shouldn't allow such deception and would be better off in the long run by not playing politics.

While the Trump administration was showing a commitment to manufacturing with the announcement, it may send a different message to government regulators such as the Environmental Protection Agency or the Occupational Safety and Health Administration should there be any problems with a factory, said Robert Weissman, president of the consumer advocacy group Public Citizen.

"Do those agencies feel constrained from enforcing the law because the president has just associated himself with that company or investment?" Weissman asked. "It's just on its face inappropriate."