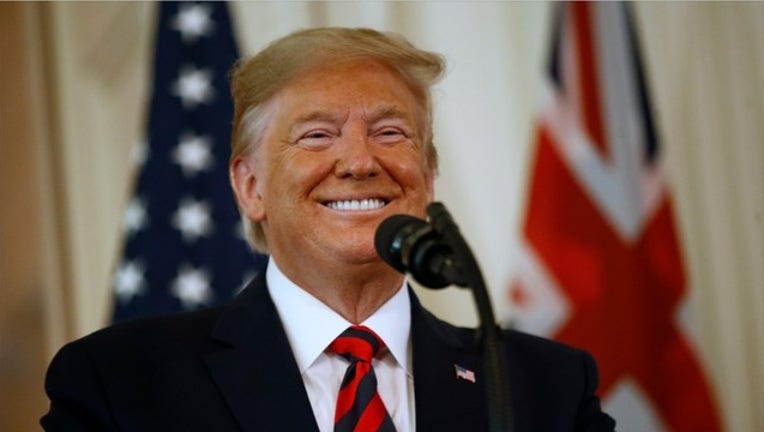 UNITED NATIONS (AP) - President Donald Trump goes before the U.N. General Assembly on Tuesday to try to square his "America First" approach to foreign policy with his administration's hope for a multinational response to Iran's escalating aggression.

While Trump wants allies to join the U.S. in further isolating Iran, he also seems to be holding to his go-it-alone strategy of using economic sanctions to pressure Tehran to give up its nuclear program and stop attacks that are rattling the Middle East.

On Monday, the Republican president praised British Prime Minister Boris Johnson's call for a new deal to replace the 2015 Iran nuclear pact from which Trump walked away last year.

The president also said he appreciated the efforts of French President Emmanuel Macron, who has been trying to get Trump back in the deal and has suggested the American president meet with Iranian President Hassan Rouhani while both are in New York this week.

But at the same time, Trump declared: "We're not looking for any mediators." He said that if Iran wants to talk, "they know who to call."

Both Trump and Rouhani have said no meeting is on the agenda for this week, although the U.S. leader left some wiggle room, adding, "I never rule anything out."

Trump was expected to use his speech to blame Iran for recent strikes against oil facilities in Saudi Arabia. Iran has denied orchestrating the attack, which Secretary of State Mike Pompeo has deemed "an act of war."

Britain, France and Germany joined the United States on Monday in blaming Iran for the attacks. Iranian Foreign Minister Mohammad Javad Zarif, for his part, pointed to claims of responsibility by Yemeni rebels and insisted: "If Iran were behind this attack, nothing would have been left of this refinery."

Trump also is expected to use his address to the General Assembly to address the ongoing standoff in Venezuela.

The United States and more than a dozen Latin American countries agreed Monday to investigate and arrest associates and senior officials of the Venezuelan government of Nicolás Maduro who are suspected of crimes like drug trafficking, money laundering and financing terrorism.

Trump is expected to have kinder words for North Korean leader Kim Jong Un, even though the autocrat continues to hold a tight grip on his nuclear weapons. Trump has met Kim for summits in Singapore and Hanoi, Vietnam, and orchestrated a surprise encounter with him in June at the Demilitarized Zone, where he became the first U.S. president to ever set foot in North Korea.

Trump said Monday that another meeting with the North Korean leader "could happen soon." He provided few details, and it wasn't clear what officials were doing behind the scenes to set up a meeting to break the diplomatic impasse over the North's development of nuclear-armed missiles targeting the U.S. mainland.

Trump's comments, even with few specifics backing them up, are tantalizing because there is extreme interest, especially in Japan and South Korea, in whether Trump and Kim can strike a deal on one of the world's most pressing standoffs.

This is Trump's third speech to the world body. Senior administration officials, who briefed reporters about the president's trip to the U.N. on condition of anonymity, said that he will use his speech to affirm America's leadership role in the international community. That's something Trump's critics claim has been weakened by the president's solo style and mercurial rhetoric and actions.

The White House said Trump will also talk about the need to work collectively within the global community to address world challenges, although apparently not climate change.

Trump stopped in only briefly Monday at a summit where world leaders talked about doing something to counter climate change. As they met, the globe hit another mark indicating a warming climate. Arctic sea ice shrank to 1.6 million square miles (4.15 million square kilometers) for the annual summer low, which tied the second lowest mark on record.

On Monday night, Trump mocked a teenage activist who gave an impassioned speech at the United Nations urging world leaders to do more to combat climate change.

Swedish 16-year-old activist Greta Thunberg scolded the audience at the U.N. Climate Action Summit on Monday, repeatedly asking, "How dare you?" Thunberg said: "We are in the beginning of a mass extinction and yet all you can talk about is money. You are failing us."

In a tweet late Monday, Trump says: "She seems like a very happy young girl looking forward to a bright and wonderful future. So nice to see!"

In his speech to the U.N. General Assembly last year, Trump expressed disdain for globalism and promoted his "America First" agenda. Like last year, Trump is expected to showcase strong U.S. economic numbers and talk about how he's strengthened America's military.

In his 2018 speech to the assembly, his self-adulation prompted chuckles from world leaders. That barely ruffled Trump, who shares a belief with his supporters that the United States has been asked to do too much for other countries and needs to focus on issues it faces at home.