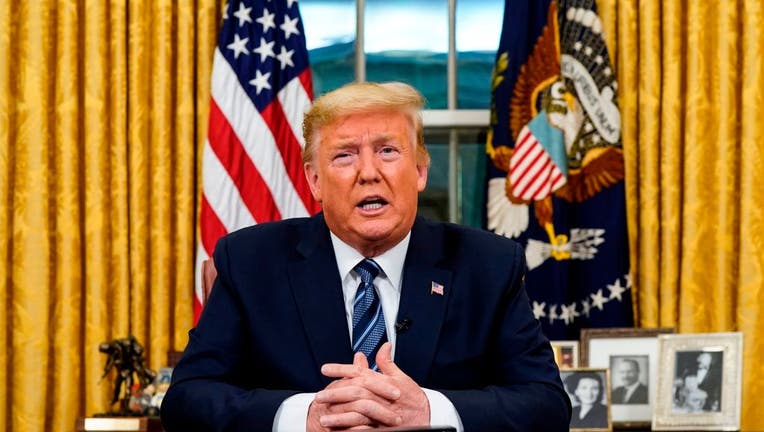 WASHINGTON - President Donald Trump said Wednesday he is suspending all travel between the U.S. and Europe for 30 days beginning Friday as he seeks to combat a viral pandemic.

Trump made the announcement in an Oval Office address to the nation, blaming the European Union for not acting quickly enough to address the novel coronavirus and saying U.S. clusters were "seeded" by European travelers.

Trump said the restrictions won't apply to the United Kingdom and the U.S. would monitor the situation to determine if travel could be reopened earlier.

Trump said "we are marshalling the full power" of the government and private sector to protect the American people.

THIS IS A BREAKING NEWS UPDATE. AP's earlier story follows below:

President Donald Trump prepared to announce a range of executive actions in an address to the nation Wednesday night as Washington raced to confront a viral pandemic that is roiling global financial markets and disrupting the daily lives of Americans.

Trump was considering new travel advisories, a national disaster declaration and a delay in the tax filing deadline. Congress, for its part, unveiled a multibillion-dollar aid package that was expected to be voted on by the House as soon as Thursday.

After days of playing down the threat, Trump announced he would be delivering a prime-time Oval Office address on the federal response to the outbreak.

The mounting effort to contain the virus and financial fallout intensified on a grueling day: Communities canceled public events nationwide, universities moved to cancel in-person classes, and families grappled with the impact of disruptions to public schools. The number of confirmed cases of the infection topped 1,000 in the U.S. and the World Health Organization declared the global crisis is now a pandemic.

As government officials warned that the outbreak in the U.S. will only get worse, the Capitol was set to halt public tours of the building as the shifting developments raised questions, urgency and a new level of unease.

"I can say we will see more cases, and things will get worse than they are right now," Dr. Anthony Fauci, director of the National Institute of Allergy and Infectious Disease, said in testimony before the House Oversight and Reform Committee. He said the virus is "10 times more lethal than the seasonal flu."

In a week of mixed messages and false starts, Washington suddenly seemed poised to act.

"I am fully prepared to use the full power of the Federal Government to deal with our current challenge of the CoronaVirus!" Trump tweeted before a meeting with bankers in which he offered assurances that "we are going to get the problem solved."

"Now we're hitting a patch and we're going to have to do something with respect to getting rid of this virus as quickly as possible and as safely as possible," he said.

Among other measures, officials were considering placing a "Level 3 Health Travel Notice" on the entire European Union. Such a notice would recommend that Americans avoid nonessential travel to the region and quarantine themselves for 14 days after returning home.

"As you know, we have another part of the world, Europe, that is in very tough shape, having a hard time right now with the virus," Trump said during a meeting with bankers to discuss how the financial services industry can help consumers and small businesses affected by the outbreak.

Yet there was confusion at the White House, even as officials began to come to grips with the enormous gravity of the situation. Aides struggled to determine what action the president could take unilaterally and what required congressional action, as Trump personally weighed the public and political reactions to the options before him.

On Capitol Hill, House Speaker Nancy Pelosi unveiled an economic assistance plan that was gaining bipartisan backing. Central to the package is free coronavirus testing nationwide and emergency funding to reimburse lost paychecks for those self-quarantining, missing work or losing jobs amid the outbreak.

The draft legislation would create a new federal emergency sick leave benefit for people with the virus or caring for a coronavirus victim. It would provide two-thirds of an employee's monthly income for up to three months.

Facing a likely surge in unemployment claims, the package would also give states money for the newly jobless. It would provide additional funding for food and nutrition benefits for pregnant women, mothers and young children. It also would up money for "meals on wheels" and food for low-income elderly people.

"This is a little bit like a hurricane, and we need to cover these outside of normal expenses," Mnuchin said.

To that end, the administration floated several other strategies, including the rare idea of declaring a national disaster that could potentially unlock funding streams, according to a person unauthorized to discuss the planning and granted anonymity.

A major disaster declaration provides additional authorities for federal agencies, including the military, to assist in responding to an emergency, including medical care, sheltering and distributing goods.

The White House was expected to delay the April 15 federal tax filing deadline for some taxpayers in a bid to soften the impact of the virus outbreak on the U.S. economy.

And the administration rolled out new recommendations for the counties most impacted by the virus in Washington state and California, while authorizing Health and Human Services Secretary Alex Azar to take whatever steps necessary to increase the supply of face masks available to doctors and nurses by providing them with masks intended for industrial use.

Mnuchin noted that Trump's executive authorities are "quite significant" and said the administration would be rolling out "various proposals."

As pressure mounted for Washington to respond, the GOP leader in the House, Rep. Kevin McCarthy of California, signaled potential Republican support for the funding package in Congress.

"We need to do something," McCarthy said. "I think they could become very bipartisan."

For most people, the new coronavirus causes only mild or moderate symptoms, such as fever and cough. For some, especially older adults and people with existing health problems, it can cause more severe illness, including pneumonia.

The vast majority of people recover from the new virus. According to the World Health Organization, people with mild illness recover in about two weeks, while those with more severe illness may take three to six weeks to recover.

Congress' attending physician told staff there could be 70 million to 100 million coronavirus cases in the U.S. That's on par with other estimates. A Harvard official has estimated that 20% to 60% of adults will get the virus, noting it's "a pretty wide range."

Trump had been promoting a broader economic stimulus package as the financial markets reel, but lawmakers from both political parties roundly panned his call for a payroll tax holiday or industry aid.

In Washington, tourists still arrived at the U.S. Capitol, but an official unauthorized to discuss the situation and speaking on condition of anonymity confirmed that tours would soon be shut down.
------
Associated Press writers Lauran Neergaard, Marty Crutsinger, Laurie Kellman and Kevin Freking in Washington contributed to this report.
------
The Associated Press receives support for health and science coverage from the Howard Hughes Medical Institute's Department of Science Education. The AP is solely responsible for all content.