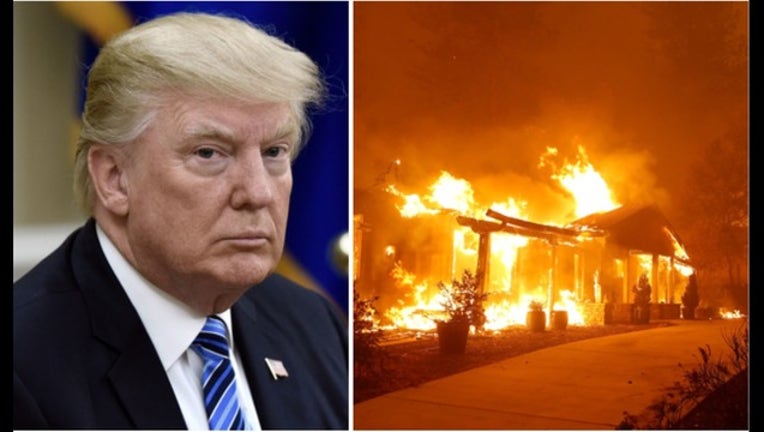 President Trump is threatening to withhold federal payments to California, claiming its forest management is "so poor." (Getty Images)

With over a quarter-million people evacuated from their potentially destroyed homes and at least 11 lives lost to active California wildfires, President Trump is threatening to withhold federal payments to California, claiming its forest management is "so poor."

In his first comments about the massive wildfires, Trump tweeted that "there is no reason for these massive, deadly and costly fires in California.” Trump said “billions of dollars are given each year, with so many lives lost, all because of gross mismanagement of the forests. Remedy now, or no more Fed payments!”

The president's comment came as firefighters battle a blaze that incinerated most of the Northern California town of Paradise and killed at least nine people in less than a day. The town was utterly leveled. Lining the fire zone streets are charred, abandoned cars that mark the moment families decided fleeing on foot was their safest option.

Named the 'Camp Fire,' it's the most destructive one in state history, surpassing last October's Tubbs Fire, which leveled over 5,600 structures. So far, the Camp Fire has claimed more than 6,700 structures -- mostly all in Paradise.

Meanwhile, wildfires also raged in Southern California, including the town of Thousand Oaks, where a gunman days earlier killed a dozen people at a local bar. Two deaths have been reported in the 'Woolsey Fire' and 250,000 people ordered to evacuate the 70,000 acre blaze that was zero percent contained Saturday afternoon.

Related: PG&E says it had transmission line problem near site of Camp Fire

"The president’s message attacking California and threatening to withhold aid to the victims of the cataclysmic fires is Ill-informed, ill-timed and demeaning to those who are suffering as well as the men and women on the front lines.

"At a time when our every effort should be focused on vanquishing the destructive fires and helping the victims, the president has chosen instead to issue an uninformed political threat aimed squarely at the innocent victims of these cataclysmic fires.

Before making the threat, Trump earlier issued an emergency declaration providing federal funds to help firefighters as thousands of them put their lives on the line to save others. Rice reminded the president that wildfires are not unique to forests, and that they're sparked in populated areas and open fields fueled by vegetation, high winds, low humidity and geography.

"Natural disasters are not “red” or “blue” – they destroy regardless of party. Right now, families are in mourning, thousands have lost homes, and a quarter-million Americans have been forced to flee. At this desperate time, we would encourage the president to offer support in word and deed, instead of recrimination and blame."

California Professional Firefighters represents more than 30,000 front line firefighters and paramedics in California. CPF is the state council of the International Association of Fire Fighters (IAFF)