SACRAMENTO, Calif. - President Trump visited McClellan Park, a former airbase just outside Sacramento, Calif. on Monday to address the raging wildfires raging across the Golden State and to honor the California National Guard for rescuing about 250 people from the Creek Fire last week.

"We need good, strong forest management, which I've been talking about for three years," Trump told reporters. "We have the best people in the world looking at this."

A reporter asked could climate change also be part of the issue.

"I think some things are possible. I think a lot of things are possible," Trump answered, before immediately going back to the idea of dried leaves and trees on the ground that are the biggest factors being the West Coast's fire issue.

Later, he said in an answer to Wade Crowfoot, the California secretary for Natural Resources: "It'll start getting cooler. You just watch ... I don't think science knows, actually."

Nearly 60% of California's forests are managed by the federal U.S. Forest Service. And while most agree that clearing forests of heavy timber would help reduce the fire threat in some places, many of California’s most disastrous recent fires have been in grasslands and on hillsides, away from the forests. Things are made worse because so many people and developments are now taking up space in fire-prone areas, not to mention PG&E lines that topple in high winds and causes fires.

Climate scientists say rising heat and worsening droughts in California consistent with climate change have expanded what had been the state’s autumn wildfire season to year-round, sparking bigger, deadlier, and more frequent fires.

At a meeting with the president inside the base, Gov. Gavin Newsom didn't mince any words regarding climate change or the prolonged period of drought experienced by those in the West.

"It is self-evident that climate change is real," Newsom said.

Earlier in the day, presidential challenger Joe Biden spoke in Delaware about the urgent need to address climate change. His vice presidential pick, Kamala Harris, is scheduled to speak in Fresno on Tuesday.

"More Americans feel the devastation. It's happening everywhere. It's happening now," Biden said. "If you give a climate arsonist four more years in the White House, why would anyone be surprised if we have more of America ablaze?"

Both Trump and Biden are focusing the presidential campaign on the wildfire-scorched West Coast.

Biden released a $2 trillion plan in July to boost investment in clean energy and stop all climate-damaging emissions from U.S. power plants by 2035. 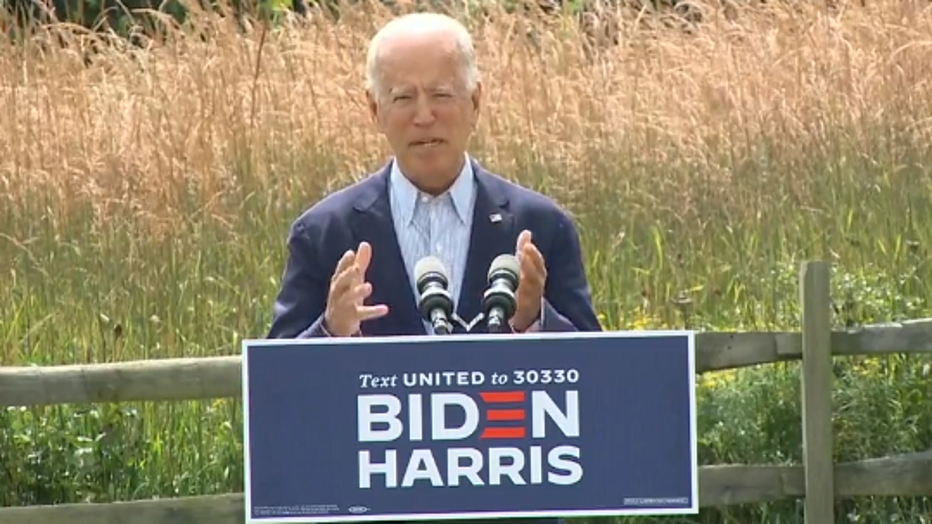 But as the wildfires rage, some climate activists have expressed frustration that Biden has not been more forceful on the issue. He has not embraced, for instance, some of the most progressive elements of the Green New Deal.

The dueling events just seven weeks before Election Day mark a stark moment on the campaign trail, where the two candidates’ dramatically contrasting outlooks on climate change —and the impact it has had on the record-setting fires ravaging California, Oregon and Washington state —will be front-and-center. 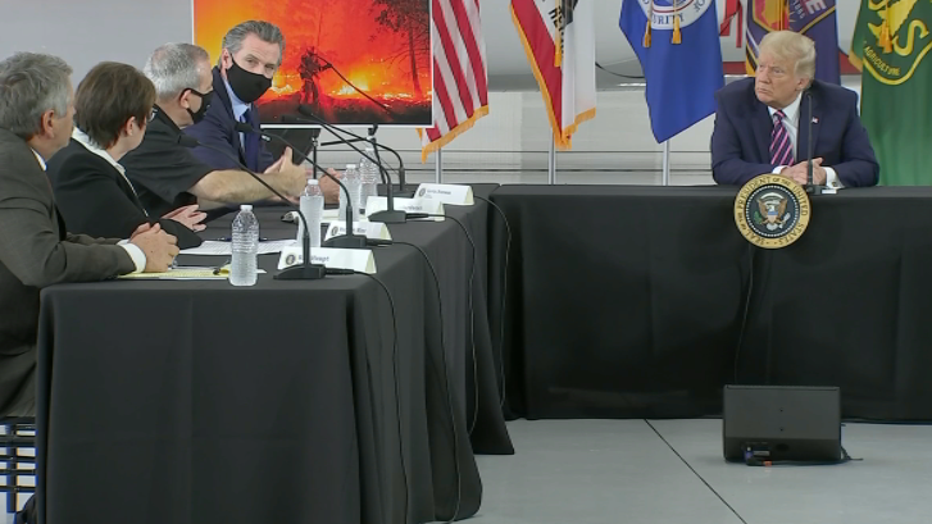 President Trump and Gov. Gavin Newsom talk about the state of California's wildfires at the McClellan Air Force Base. Sept. 14, 2020

The disaster and new national attention on climate change could be creating another difficult moment for a president facing multiple challenges, including the coronavirus pandemic, joblessness and social unrest. Trump has repeatedly discounted the impact of climate change, walked away from a major international climate agreement and proudly rolled back environmental regulations.

All five of the state’s largest fires in history have raged in the past three years, as well as the deadliest fire, a 2018 blaze that killed 85 people when it swept through the town of Paradise on the slopes of the Sierra Nevada.

An analysis out in August from Stanford climate and wildfire researcher Michael Goss and others found that a nearly 2-degree rise in autumn temperatures and 30 percent drop in rainfall has more than doubled the number of autumn days with extreme fire weather over the past 40 years.

Confronting the worsening conditions of climate change, and the still more dangerous conditions to come, has “critical relevance for ongoing efforts to manage wildfire risks in California and other regions,” the researchers wrote. 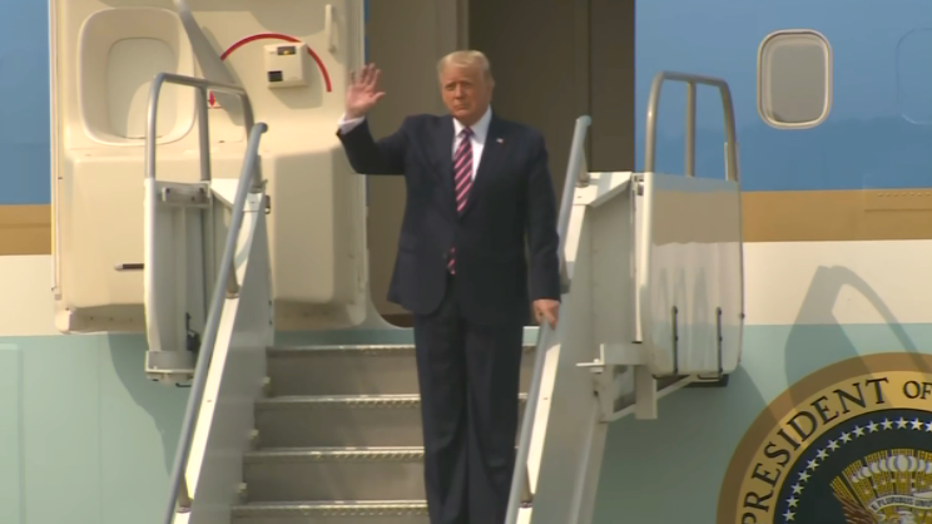