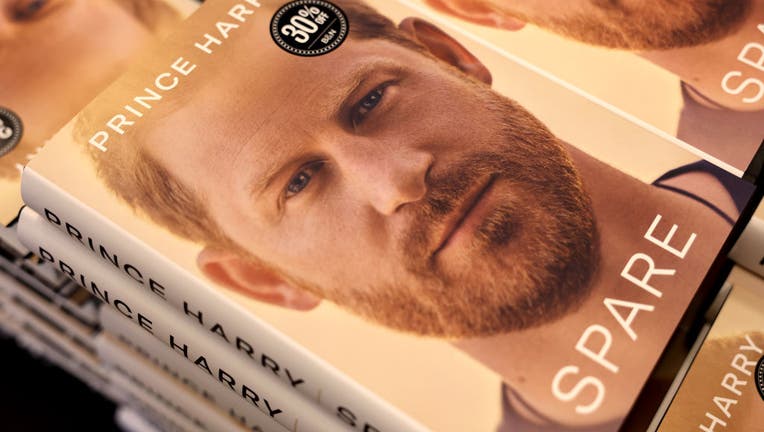 CHICAGO, ILLINOIS - JANUARY 10: Prince Harry's memoir Spare is offered for sale at a Barnes & Noble store on January 10, 2023 in Chicago, Illinois. The book went on sale in the United States today. (Photo by Scott Olson/Getty Images)

Prince Harry's tell-all memoir "Spare" has become the fastest-selling non-fiction book of all time, according to Guinness World Records.

It came after 1.43 million copies were sold during its first-day sale in the UK, US, and Canada.

Penguin Random House announced Wednesday that first-day sales for the Harry’s tell-all memoir topped 1.4 million copies, a record pace for non-fiction from a company that also publishes Barack and Michelle Obama, whose "Becoming" needed a week to reach 1.4 million when it was released in 2018.

The sales figures for "Spare" include hardcover, audiobook and e-book editions sold in the U.S., Canada and the United Kingdom.

Josh Rom joins Andrew Craft to discuss Prince Harry's memoir, 'Spare.' The tell all is expected to detail the British royal family’s internal feud, as well as his marriage to Meghan Markle.

″‘Spare’ is the story of someone we may have thought we already knew, but now we can truly come to understand Prince Harry through his own words," Gina Centrello, President and Publisher of the Random House Group, said in a statement.

"Looking at these extraordinary first-day sales, readers clearly agree, ‘Spare’ is a book that demands to be read, and it is a book we are proud to publish."

One of the most highly anticipated memoirs in recent times, "Spare" is Harry’s highly personal and intimate account of his life in the royal family and his relationship with the American actor Meghan Markle, Duchess of Sussex.

In his highly anticipated autobiography, Spare, Prince Harry releases detailed accounts of his life in the Royal Family and the issues that lead to his departure. In one of the bombshell moments of the memoir, Harry recounts what he says was an attack by his brother, William, now Prince of Wales. Royal expert and commentator Josh Rohm joins LiveNOW's Andrew Craft to discuss the newly released memoir. More LiveNOW from FOX streaming video

From accounts of cocaine use and losing his virginity to raw family rifts, "Spare" exposes deeply personal details about Harry and the wider royal family. Even Americans may flinch when he confides that a trip to the North Pole left him with frostbitten genitals that proved most irritating during his brother’s wedding to Kate.

New York Times critic Alexandra Jacob called the book, and its author, "all over the map — emotionally as well as physically," at times "frank and funny" and at other times consumed by Harry’s anger at the British press. In The Washington Post, Louis Bayard found "Spare" to be "good-natured, rancorous, humorous, self-righteous, self-deprecating, long-winded. And every so often, bewildering."