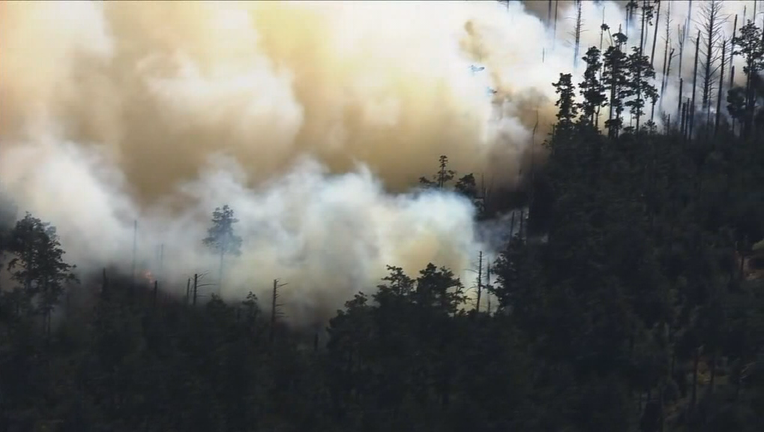 POINT REYES, Calif. - Following a day that began with an optimistic press conference where fire officials announced they had gained command on the Woodward Fire in Marin County, the blaze picked up and the first evacuations were ordered on Monday

Officials described the setback -- having favorable weather but halted progress -- as discouraging in a news conference Tuesday morning. Their resumed efforts at Point Reyes National Seashore required some double-checking in areas with increased fire activity before they could initiate all resources towards containment, according to Brandon Cichowski, operation section chief for Northern Rockies Incident Management team two.

Additionally, they were not able to get an infrared view from above on Monday night, so the evening growth is not included in the total charred area. Burned acreage stands at over 2,700, but officials estimate 350 or more acres on top of that.

Containment is still at 5 percent, same it's been for days, because the fire is wanting to push out in certain areas, especially on the north side of the blaze. They do have containment lines but are not comfortable walking away from them, as the fire is still growing.

“The fuel is challenging and some of the areas have no recorded fire history and it is presenting a lot of challenges for us,” said Marin County fire Chief Jason Webber, who stressed that residents heed evacuation orders if they’re announced.

Officials are also asking residents who evacuate to not turn sprinklers on and shut off water systems because the north Marin and Inverness water systems are fragile, have a low volume of water and crews need it for the fire fight.

Monday afternoon, at the upper-coastal perimeter of the fire, they had increased activity in some of the coastal scrub, which they hit with water-dropping helicopters and retardant. But due to the thick scrub, the water and retardant weren’t penetrating to the ground and the fire was able to get through.

The Woodward Fire response effort includes over 230 personnel made up of 7 crews, 19 engines, 5 water-dropping helicopters, and two large water scoopers.

The National Park Service on Friday closed Point Reyes National Seashore until further notice due to the Woodward Fire. All park roads and trails have been closed, and campground operations have also been suspended.