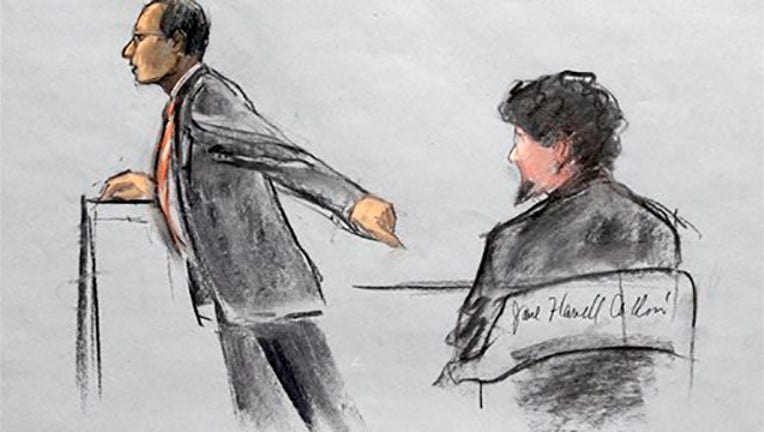 BOSTON (AP) — As he planted a backpack containing a bomb just feet from a group of children, Dzhokhar Tsarnaev made a cold-hearted decision aimed at spreading terror and punishing America for its wars in Muslim countries, a federal prosecutor told jurors Monday during closing arguments in Tsarnaev's death penalty trial.

"There was nothing about this day that was a twist of fate," said Assistant U.S. Attorney Aloke Chakravarty. "This was a cold, calculated terrorist act. This was intentional. It was bloodthirsty. It was to make a point. It was to tell America that we will not be terrorized by you anymore. We will terrorize you."

Martin Richard, an 8-year-old Boston boy, was killed when the bomb Tsarnaev was accused of planting exploded. And two young women died when Tsarnaev's brother set off a bomb just down the street. Both explosives were placed in crowds gathered at the finish line of the 2013 marathon. More than 260 people were wounded.

The defense began its closing arguments in the afternoon, after which the jury was expected to begin deliberating 30 charges against Tsarnaev, 21.

If he is convicted — and that was considered a near certainty, since his own lawyer, Judy Clarke, admitted during opening statements that Tsarnaev took part in the crime — the jury will begin hearing evidence on whether he should get life in prison or a death sentence.

Hoping to save Tsarnaev's life during the penalty phase, Clarke has argued that Tsarnaev fell under the influence of his now-dead older brother, Tamerlan, 26.

Prosecutors used their closing argument to remind the jury of the horror of that day, showing photographs and video of the carnage and chaos after the twin pressure-cooker bombs exploded. In a video that showed the aftermath of the first blast, jurors could hear the agonizing screams of Krystle Campbell, a 29-year-old restaurant manager who bled to death on the sidewalk.

Taking aim at the argument that Dzhokhar Tsarnaev was led astray by his older brother, Chakravarty repeatedly referred to the Tsarnaevs as "a team" and "partners" in the attack. Tamerlan Tsarnaev died four days after the bombings after he was shot by police and run over by Dzhokhar during a getaway attempt.

"That day, they felt they were soldiers. They were the mujahedeen, and they were bringing their battle to Boston," Chakravarty said.

As for the youngsters killed or maimed in the attack, Chakravarty said: "These children weren't innocent to him. They were American. Of all the places that he could have placed the bomb, he placed it right there."

Chakravarty said the brothers planned to go to New York to set off more bombs. The brothers shot and killed an MIT police officer in an unsuccessful attempt to steal his gun. Hours later, they hurled pipe bombs and another pressure cooker bomb at police in nearby Watertown as they tried to escape, Chakravarty said.

Tamerlan was killed; Dzhokhar was found hiding in a dry-docked boat in Watertown about 18 hours later.

At the end of his closing argument, Chakravarty displayed photos of the three people killed in the bombings and the police officer who was shot to death.

"They are no longer with us," Chakravarty said. "This is the result of the defendant's choice to be a terrorist, his choice to make a statement. These were choices that he was proud of."