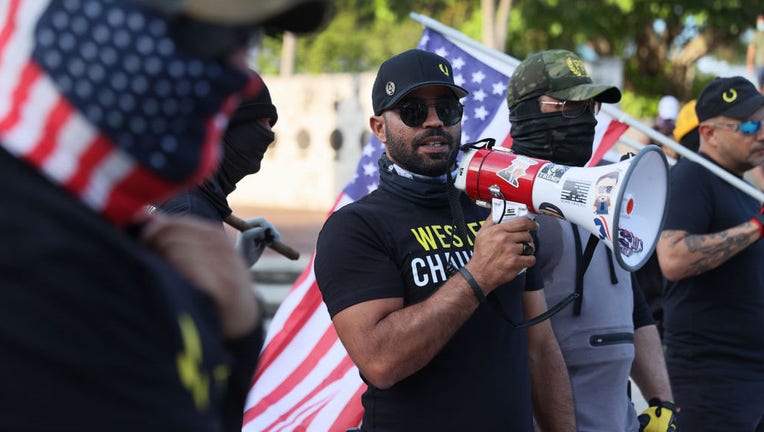 FILE - Enrique Tarrio (C), leader of the Proud Boys, uses a megaphone while counter-protesting people gathered at the Torch of Friendship to commemorate the one-year anniversary of the killing of George Floyd on May 25, 2021, in Miami, Florida. (Phot

WASHINGTON - Jury selection in the seditious conspiracy case against former Proud Boys national chairman Enrique Tarrio and four others charged in the attack on the U.S. Capitol began Monday after the judge denied defense attorneys' last-minute bid to delay over expected congressional action related to Jan. 6, 2021.

Defense attorneys pushed to postpone jury selection in the high-profile case until after the new year due to the expected action this week by the House committee investigating the insurrection. A defense lawyer argued that it's impossible to know what evidence related to the Proud Boys might be released by the committee and that media coverage could taint the jury pool.

"We don't want to be picking the jury in this highly confusing and combustible environment," attorney Norm Pattis, who is representing Proud Boy Joseph Biggs, told the judge.

U.S. District Judge Timothy Kelly said they would push ahead despite the committee's work and told defense attorneys that he would remind jurors to avoid media coverage related to Jan. 6. The first group of potential jurors was brought into the courtroom Monday morning to begin the process of choosing a panel, which could take several days.

"The former president is not on trial here today," the judge said before he called potential jurors into the courtroom.

Tarrio is perhaps the highest-profile defendant to face jurors yet in the attack that halted the certification of President Joe Biden's win, left dozens of police officers injured and led to nearly 1,000 arrests. Tarrio, of Miami, and the others — Ethan Nordean, Zachary Rehl, Dominic Pezzola and Biggs — are charged with several other crimes in addition to seditious conspiracy.

They are accused of plotting to attack the Capitol in a desperate bid to overturn Biden's victory. They will face jurors just weeks after two leaders of another extremist group, the Oath Keepers, were convicted of seditious conspiracy in a major victory for the Justice Department’s extensive Jan. 6 prosecution.

If convicted of sedition, they could face up to 20 years in prison. The trial is expected to last at least six weeks.

The Proud Boys and Oath Keepers are now facing the first lawsuits related to the Jan. 6 insurrection at the U.S. Capitol. Washington, D.C., Attorney General Karl Racine announced that the city has filed a civil lawsuit against the two groups for "conspiring to terrorize the District by planning, promoting, and participating in the deadly attack on the Capitol."

Jury selection comes as the House committee that has been investigating the insurrection is poised to recommend criminal charges against former President Donald Trump and potentially against associates and staff who helped him launch a multifaceted pressure campaign to try to overturn the 2020 election. The committee is holding a final meeting on Monday and is expected to preview its massive final report, which will include findings, interview transcripts and legislative recommendations. Lawmakers have said a portion of that report will be released Monday.

RELATED: January 6 Committee Hearing: Where and when to watch Monday's final public presentation

Tarrio wasn't in Washington on Jan. 6 because he had been arrested two days earlier on charges that he vandalized a Black Lives Matter banner at a historic Black church during a protest in December 2020. But prosecutors say he was the leader of a conspiracy to stop the transfer of power from Trump to Biden.

Days before the riot, Tarrio posted on social media about "revolution," according to court papers. Citing what they alleged was an encrypted message group created by Tarrio, authorities say members discussed attacking the Capitol. One message said: "Time to stack those bodies in front of Capitol Hill." Another asked whether people were going to "push thru police lines and storm the capitol buildings?"

Officers who defended the U.S. Capitol on Jan. 6, 2021, from supporters of then-President Donald Trump in a brutal attack were honored with Congressional Gold Medals on Dec. 6, 2022.

Prosecutors allege that even after his arrest, Tarrio kept command over the Proud Boys who attacked the Capitol on Jan. 6 and cheered on their actions from afar. As rioters stormed the building, he posted "don't (expletive) leave" on social media, and then later "We did this..."

Nordean, Pezzola, Biggs and Rehl were part of the first wave of rioters to push onto Capitol grounds and charge past police barricades toward the building, according to prosecutors. Pezzola used a riot shield he stole from a Capitol police officer to break a window, allowing the first rioters to enter the building, prosecutors allege.

Defense attorneys have denied that the Proud Boys leaders planned or led an attack on the Capitol.

Tarrio’s lawyers say he didn’t instruct or encourage anyone to go into the Capitol or engage in violent or destructive behavior. Nordean’s attorney accused the Justice Department of selective prosecution and targeting him based on his political associations and beliefs. Rehl’s lawyer asked the judge to toss the indictment on First Amendment grounds, arguing that the case rested solely on Rehl’s political views and free speech.

Another former Proud Boys leader, Jeremy Joseph Bertino, pleaded guilty to seditious conspiracy in October, and could testify against Tarrio and the others under a cooperation deal with the government.