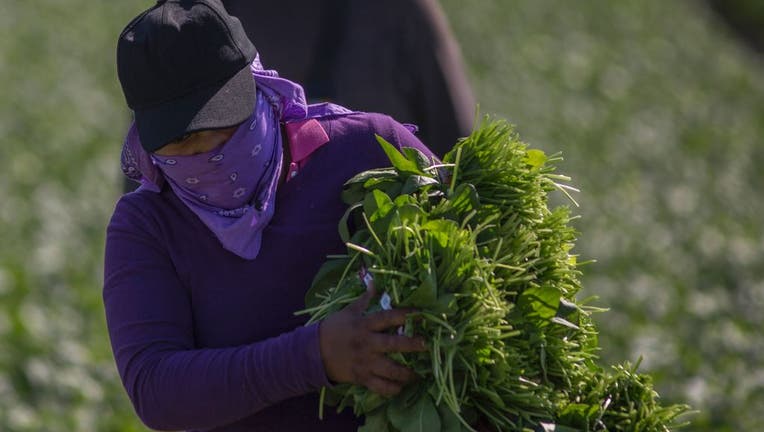 OAKLAND, Calif. - In a grand and hopeful announcement on April 16, Gov. Gavin Newsom promised $125 million to be distributed to a sliver of the state's three million undocumented immigrants.

But to date, nothing has been released and the lack of specifics has created confusion and frustration for many who are not eligible for federal stimulus boost because of their legal status.

The earliest the money could get into people's hands is in May that is, if fundraising efforts are a success and lawsuits don't block Newsom's initiative.

"At the street level, there has been tremendous confusion," said Francisco Herrera, co-director of San Francisco's Dolores Street Community Services who oversees the Day Labor Program. "People started hearing about the money and folks automatically started asking, 'Where do I apply? But there is no place to apply. There are no funds available. That led to many who questioned, 'Is this even real?'"

KTVU set out to find out where the money is and when it will be distributed. We spoke with the two agencies vested with overseeing and handing out the money: The California Department of Social Services and the Grantmakers Concerned with Immigrant and Refugees in Sebastopol to provide an update.

Here's what we found:

WHAT ARE THE FUNDS CALLED?

There are two funds. One is a $75 million Disaster Relief Assistance for Immigrants and it is comprised of taxpayer money administered through the California Department of Social Services.

The other fund comprises private money and the goal is to raise $50 million. This fund is called the California Immigrant Resilience Fund.

HAS ALL THE MONEY BEEN RAISED?

Yes and no. The taxpayer money is there, but San Francisco attorney Harmeet Dhillon has sued the state to stop it from providing money to undocumented immigrants. A taxpayer group in Los Angeles called Judicial Watch has also sued. It's unclear if their suits will hold up the money.

In terms of the private money, $9.9 million of the estimated $50 million has been raised as of Friday. It's unclear when the remaining money will be raised. Anyone who wants to donate can learn more here.

WHEN CAN IMMIGRANTS GET THE MONEY?

In terms of the state funds, Department of Social Services spokesman Jason Montiel said that it would be distributed sometime in May. However, he had no comment on whether that would be tied up because of the lawsuits.

In terms of the private funds, Kevin Douglas, director of national programs for GCIR, said his group needs to raise an additional $40 million and then choose the groups around the state to distribute the money. Those groups have not been chosen yet. He said it takes time to vet them and make sure they will not share any data with government officials or outside agencies and will be transparent about the money. He did not put a time frame on when this would be accomplished. But he did say the nonprofits would likely be announced the first week in May. He added that the amount that has been raised so far, $9.9 million, would be distributed later in the month.

IS THERE ENOUGH MONEY?

The total of $125 million is to be shared among 150,000 people. The state has an estimated three million undocumented immigrants. Douglas said that some of the nonprofits already have waiting lists of up to 6,000 people who have applied for the money.

WHO WILL DISTRIBUTE THE MONEY?

The Department of Social Services will choose among 100 nonprofit community-based organizations to distribute the funds. The list of the selected nonprofit organizations should be available sometime in May. Here is the list of state-funded immigrant provider services in California.

The GCIR group is still choosing who will distribute the money. Immigrants will have to apply to each of these groups separately. When the groups are announced, they will be posted on the group's website.

WHO HAS DONATED SO FAR?

The governor announced that these groups have donated so far: $5.5 million from Emerson Collective, Blue Shield of California Foundation, The California Endowment, The James Irvine Foundation, Chan Zuckerberg Initiative and an anonymous donor, among others. Those interested in supporting this fund can donate at www.immigrantfundCA.org.

HOW MUCH MONEY CAN APPLICANTS GET?

For the private money, the individual nonprofits will determine the amount based on need, cost-of-living expenses and other factors.

WHAT IS THE ELIGIBILITY CRITERIA?

For the state, immigrants must provide information that they are an undocumented adult who is ineligible for federal COVID-19 related assistance, including CARES Act tax stimulus payments or pandemic unemployment benefits; and,has experienced a hardship as a result of COVID-19.

WHAT IS THE BREAKDOWN OF FUNDS AVAILABLE?

In terms of the state money, the $75 million will be distributed geographically based on the percentage of undocumented people in the region. The breakdown is as follows:

In terms of the $50 million in private money, the individual nonprofits will determine who gets what.

ARE THEY OTHER WAYS THAT UNDOCUMENTED IMMIGRANTS CAN GET FUNDS?

Yes. In the Bay Area and California, there are several nonprofits and groups that have been raising and distributing money separate from what the governor announced. Here is a list of some of them: