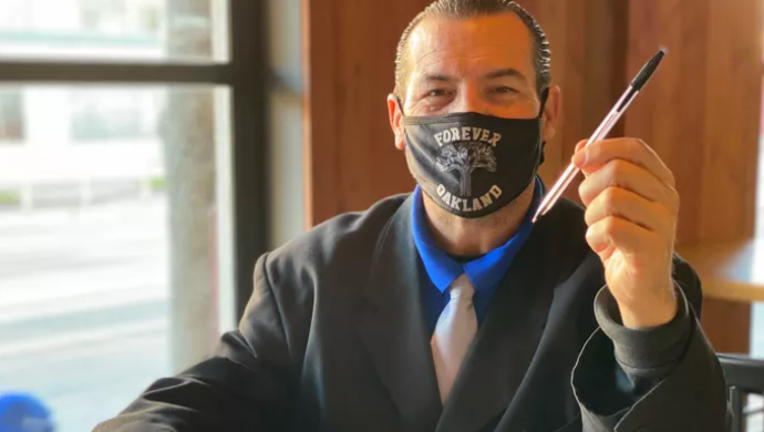 OAKLAND, Calif. - A Raiders super fan known for his philanthropy, epic tailgate parties and deep love of Oakland has died.

"Those who knew him know he was a fighter and fought until the very end," Leighton wrote.

On its website, the Raiders were also mourning Jones, the founder of Make Oakland Better Charities and the leader of the 66th M.O.B. Alley tailgates. The proceeds from these community celebrations at the Oakland Coliseum's 66th Avenue gate benefited local nonprofits to feed the homeless.

He was often seen pictured with friends cleaning up the streets of Oakland. And of course, at Raiders games, when they were in Oakland. He founded Forever Oakland, fighting desperately, and unsuccessfully, to stop the team from moving to Las Vegas.

He told the East Bay Times in 2014 that his advocacy was a combination of his "desire to be a fan for humanity and make the world a better place, and my experience of being an Oakland Raiders fan" since he was a young boy.

"Griz was a fierce advocate for the City of Oakland and embodied the essence of Raiders tailgating, often starting days prior to each game and welcoming all of Raider Nation to join in the lead up to game days," the team said.

"Griz Jones was Oakland to the bone," Oakland Mayor Libby Schaaf tweeted. "More than just a die-hard sports fan, Griz built a community — and put that community to work in service of Oakland. Love, respect and gratitude to Griz and the 66th St. Mob. #ForeverOakland"

Councilman Loren Taylor also tweeted about Jones, saying his heart breaks for his friends and family.

Taylor called Jones a "true champion of all things Oakland."

Without him, Taylor said, there will be a "huge gap in our community that can never fully be replaced."

Jones will be buried at the Chapel Of The Chimes in Oakland, where the late Raiders owner Al Davis is laid to rest and where he loved to go on Davis' birthday every year.