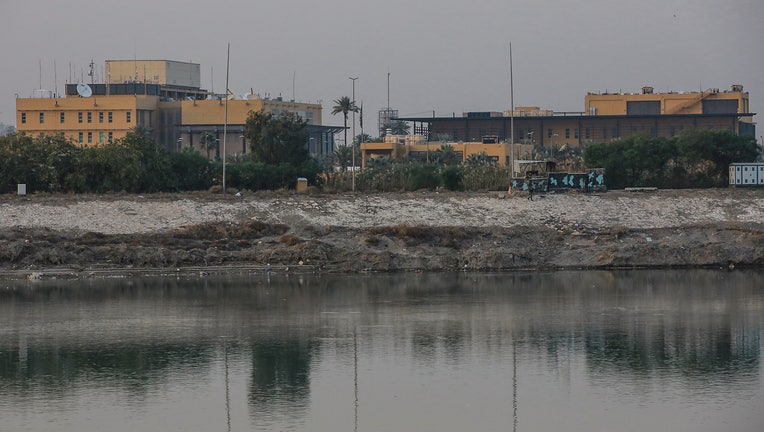 FILE - 03 January 2020, Iraq, Baghdad: A general view of the US embassy compound on the banks of the Tigris River. (Photo by Ameer Al Mohmmedaw/picture alliance via Getty Images)

SAN JOSE, Calif. - U.S. Rep. Ro Khanna of Silicon Valley is teaming with U.S. Sen. Bernie Sanders in a legislative effort to block funding they say the Pentagon and President Donald Trump could otherwise use to launch the country into war with Iran.

"Today, we are seeing a dangerous escalation that brings us closer to another disastrous war in the Middle East," Khanna said in a statement Friday. "A war with Iran could cost countless lives and trillions more dollars and lead to even more deaths, more conflict, more displacement in that already highly volatile region of the world."

President Trump on Thursday authorized a U.S. military airstrike in Iraq that killed top Iranian military leader Qasem Soleimani, an action that left many across the globe discussing the likelihood of retaliation by Iran and its allies.

Khanna and Sanders say they plan to introduce legislation that could "prohibit any funding for offensive military force in or against Iran without prior congressional authorization," according to the Silicon Valley congressman.

A previous measure to amend the National Defense Authorization Act to block war funding directed at Iran, authored by Khanna and U.S. Rep. Matt Gaetz of Florida, passed a vote in the House of Representatives in July, but was later dropped in December.

"War must be the last recourse in our international relations," Khanna said.

"After authorizing a disastrous, $738 billion military budget that placed no restrictions on this president from starting an unauthorized war with Iran, Congress now has an opportunity to change course. Our legislation blocks Pentagon funding for any unilateral actions this president takes to wage war against Iran without Congressional authorization."

Khanna said that instead of a war, the United States has a "crumbling infrastructure," desperate housing needs, and "the existential crisis of climate change" to face, and that "we as a nation must get our priorities right."

"The House and Senate should pass our legislation immediately and uphold our constitutional responsibilities," Khanna said. "We must invest in the needs of the American people, not spend trillions more on endless wars."

Sanders wrote on Twitter that he and Khanna will introduce the bill "to stop Donald Trump from illegally taking us to war against Iran. It's working-class kids who will to fight and die in a disastrous new Middle East conflict -- not the children of billionaires."