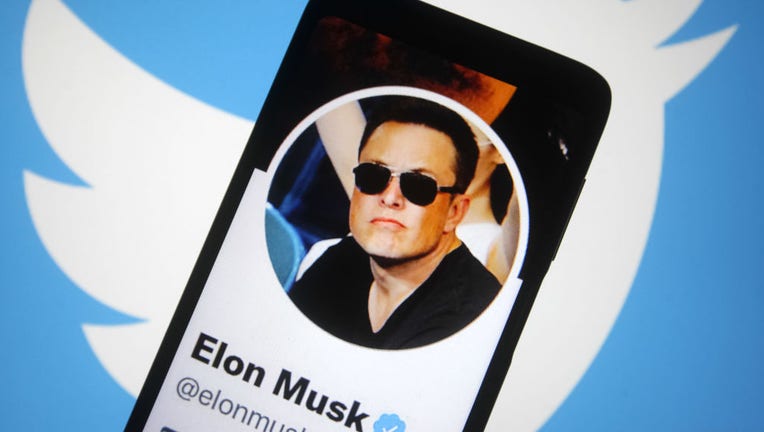 FILE - In this photo illustration, the Twitter account of Elon Musk is seen on a smartphone screen, and the Twitter logo in the background. (Photo Illustration by Pavlo Gonchar/SOPA Images/LightRocket via Getty Images)

SAN FRANCISCO - Elon Musk plans to lay off most of Twitter’s workforce if and when he becomes owner of the social media company, according to a report Thursday by The Washington Post.

Musk has told prospective investors in his Twitter purchase that he plans to cut nearly 75% of Twitter’s employee base of 7,500 workers, leaving the company with a skeleton crew, according to the report. The newspaper cited documents and unnamed sources familiar with the deliberations.

San Francisco-based Twitter and a representative for Musk attorney Alex Spiro did not immediately respond to messages seeking comment.

While job cuts have been expected regardless of the sale, the magnitude of Musk's planned cuts are far more extreme than anything Twitter had planned. Musk himself has alluded to the need to cull some of the company's staff in the past, but he hadn't given a specific number — at least not publicly.

"A 75% headcount cut would indicate, at least out of the gates, stronger free cash flow and profitability, which would be attractive to investors looking to get in on the deal," said Wedbush analyst Dan Ives. "That said, you can’t cut your way to growth."

Ives added that such a drastic reduction in Twitter's workforce would likely set the company back years.

SEE ALSO: Elon Musk offers to end legal fight, pay $44B to buy Twitter after all

Already, experts, nonprofits and even Twitter's own staff have warned that pulling back investments on content moderation and data security could hurt Twitter and its users. With as drastic a reduction as Musk may be planning, the platform could quickly become overrun with harmful content and spam — the latter of which the Tesla CEO himself has said he'll address if he becomes owner of the company.

After his initial $44 billion bid in April to buy Twitter, Musk backed out of the deal, contending Twitter misrepresented the number of fake "spam bot" accounts on its platform. Twitter sued, and a Delaware judge has given both sides until Oct. 28 to work out details. Otherwise, there will be a trial in November.