SAN FRANCISCO BAY AREA - San Francisco Bay Area roads aren't getting any better, but at least they aren't getting any worse, according to data released Tuesday by the Metropolitan Transportation Commission on the region's pavement quality.

The MTC, the transportation planning, financing and coordinating agency for the nine-county Bay Area, put its 2020 pavement condition index score at 67 out of 100, in the fair range with 0 representing a failed road and 100 meaning a brand-new or resurfaced roadway.

That PCI number of 67, computed on a three-year moving average, has remained the same for five years, which MTC officials said points toward the continued challenges faced by public works departments locally to maintain aging roads. 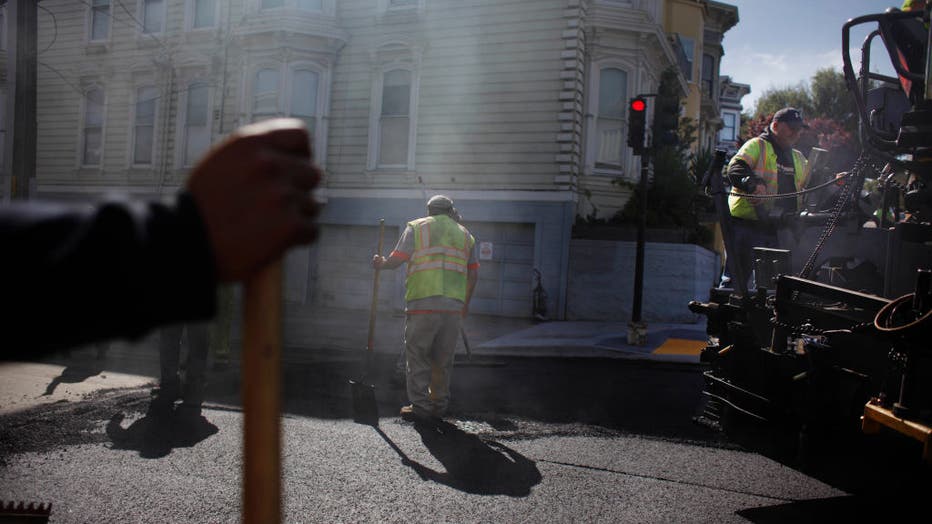 Workers from MCK Paving Services work in the intersection as they pave the street at 21st and Guerrero Street on Friday, March 21, 2014, in San Francisco, Calif. (Photo By Lea Suzuki/The San Francisco Chronicle via Getty Images)

San Francisco has a three-year moving average of 74, the highest of the Bay Area's three largest cities compared to 66 for San Jose and 52 for Oakland. Cupertino had the highest PCI rankings over the previous three years at 85, with other cities in the 80s including Dublin, Palo Alto, Brentwood, Clayton, Orinda, Woodside, Danville and Foster City.

The pavement ranked the Bay Area's worst in the data was found in the coastal San Mateo County city of Pacifica, which had a PCI of 42. Others below 50 included Petaluma, Sebastopol and Vallejo.

Oakland's Department of Transportation is starting a summer-long project to repave more than two dozen miles of city streets.

Commission officials in a news release cited the importance of tax measures, such as the state's Senate Bill 1 gas tax approved in 2017 and local sales taxes in cities like Orinda, in helping to fund the roadwork just to maintain the status quo.

"Local streets and roads money from the SB 1 transportation package is helping counties and cities hold the line against deterioration, but our goal at MTC is to raise the region's average PCI score into the mid-80s. The data give us a real appreciation for just how many miles of roadway the Bay Area has and a reminder of how old a lot of our pavement is, too," MTC chair and Napa County Supervisor Alfredo Pedroza said in a statement.

Hundreds of miles of San Jose streets are getting a face-lift this fiscal year. Monday city leaders announced the biggest repaving project in the city’s history. KTVU's Jesse Gary reports San Joseans have been ready for the face lift.

The complete list of PCI scores by city and unincorporated county areas can be found here.