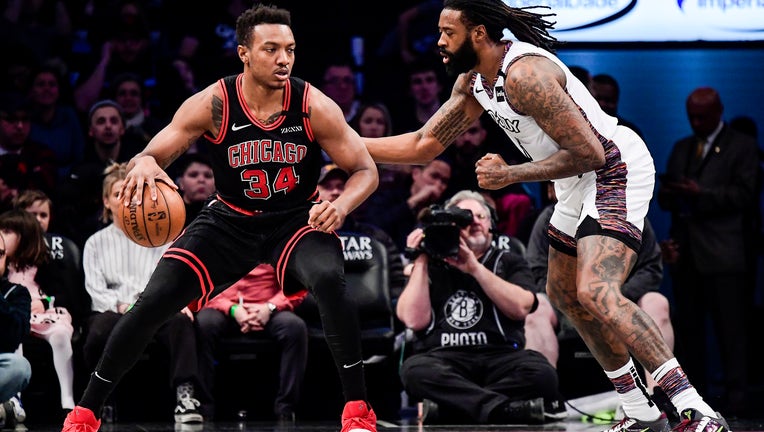 NEW YORK, NEW YORK - MARCH 08: Wendell Carter Jr. #34 of the Chicago Bulls is defended by DeAndre Jordan #6 of the Brooklyn Nets in the first half at Barclays Center on March 08, 2020 in New York City. NOTE TO USER: User expressly acknowledges and ag

OAKLAND, Calif. - The Golden State Warriors and the Chicago Bulls have reportedly discussed a draft-day deal.

The Warriors would trade their second overall pick for center Wendell Carter Jr. and the Bulls’ fourth pick, according to The Ringer’s Kevin O’Connor.

However, Bulls reporter K.C. Johnson said Wednesday morning that Carter is under the impression Chicago’s new management values him.

Carter, 21, was drafted No. 7 overall two years ago and has had a pair of productive seasons. In 87 total appearances, the 6-foot-9 center has averaged 10.8 points, 8.2 rebounds and 1.1 blocks while shooting just above 50 percent.

The trade rumors come as pressure mounts for management to maximize who they select to join their lineup of stars coming off a last-place finish.

Adding Carter could represent the young big man they’ve been searching for as they look energize an organization that had reached five consecutive NBA Finals prior to last season. And they’d only have to move down two places in the draft order to do so. They also have two picks in the second round, No. 48 and 49.

After multiple delays, the NBA draft kicks off Wednesday night, but with a different look. Commissioner Adam Silver will be announcing picks from the ESPN campus in Bristol, Connecticut, instead of in New York, where it’s traditionally held in June.

The top two draft prospects are 6-foot-6 point guard LaMelo Ball and Memphis center James Wiseman. Ball is the better prospect, but Wiseman makes more sense for the Warriors, if they keep their second pick.