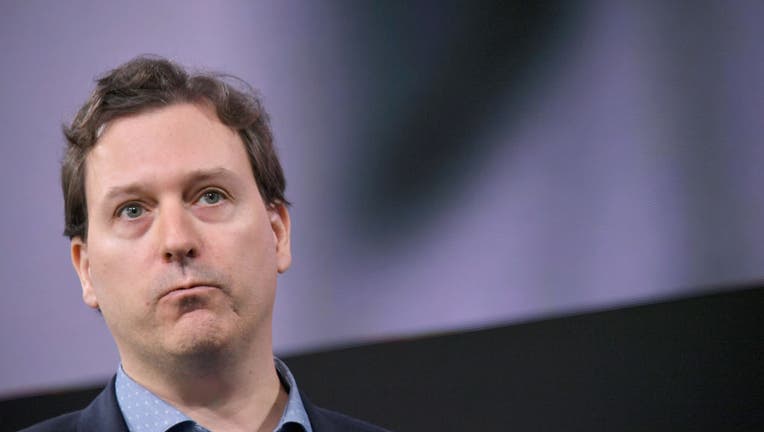 NEW YORK, NY - MAY 10: John Carreyrou speaks at the WSJ The Future of Everything Festival at Spring Studios on May 10, 2018 in New York City. (Photo by Michael Loccisano/Getty Images)

SAN JOSE - The former Wall Street Journal reporter who broke the story on the failings inside Silicon Valley startup Theranos may be banned from covering the trial his reporting precipitated, documents filed Friday in federal court revealed.

The reporter, John Carreyrou, is also the subject of a judge’s gag order on the case against former Theranos CEO Elizabeth Holmes -- even as he covers the trial and hosts a popular podcast.

"This has implications with respect to the First Amendment in many ways," Carreyrou’s attorney, Jean-Paul Jassy said in an interview with KTVU on Friday. "He’s drawn the ire of the defense because he’s done such an amazing job of reporting on the Theranos matter."

Reporter who broke Theranos story could be barred from trial

The former Wall Street Journal reporter who broke the story on the failings inside Silicon Valley startup Theranos may be banned from covering the trial his reporting precipitated, documents filed Friday in federal court revealed.

Carreyrou broke the Theranos story for the Journal back in 2015, and wrote the definitive book on it, titled "Bad Blood."

He’s followed up on his reporting most recently with the "Bad Blood, The Final Chapter" podcast, in which he details the still unfolding saga with new revelations and insights into how he broke the story.

But since Carreyrou was added to Holmes’ list of potential witnesses for the defense that was filed before the trial began, he is subject to the same restrictions as the other 60 people on the list.

Jassy said his client was never subpoenaed in the case, and it’s unclear if the defense really even plans to put him on the stand. He wants Judge Edward Davila to exclude Carreyrou from the restrictions the other possible witnesses are under.

"The person who has really been the journalistic expert on this issue could be precluded from hearing the testimony of other witnesses at trial," Jassy said. "That’s a First Amendment right to be able to go to a trail, see the trial and be able to talk about it."

But legal analyst Steve Clark said Davila is likely being cautious to avoid any possible violations of Holmes’ rights to a fair trail that could be appealable.

"I think the judge is going to say Ms. Holmes’ right to a fair trial is paramount to your right to communicate though the First Amendment, at least for the time of this trial," he said.

Clark was in court Friday as the defense continued cross-examining Theranos’ former lab director, a key witness for the prosecution who detailed numerous failings with the blood testing technology. Dr. Adam Rosendorff revealed earlier in his testimony that he was an early source for Carreyrou in his reporting.

But under cross examination, defense attorney Lance Wade sought to poke holes in Rosendorff’s accounts of events inside the company’s testing lab through a series of statements and documents from 2013 and 2014. That’s when Theranos launched its blood testing equipment inside Walgreens stores in Arizona and California.

"What the defense did today was undermine his previous testimony by meticulously and surgically going through old emails," Clark said.