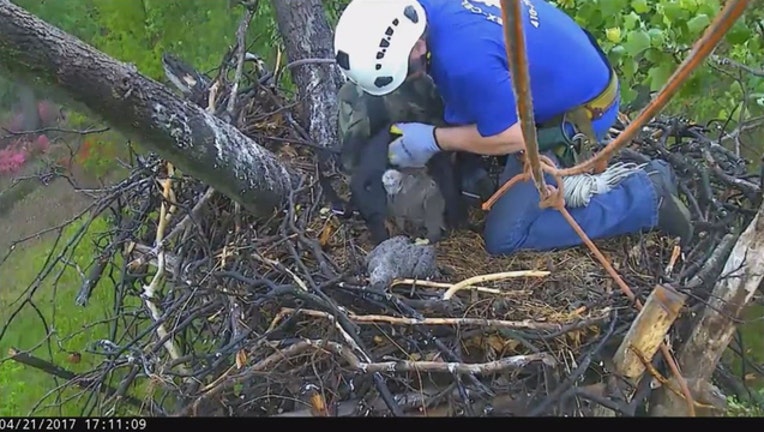 WASHINGTON - An eaglet that was rescued after getting its leg stuck in a nest at the U.S. National Arboretum has finally returned to its home on Friday.

According to the American Eagle Foundation, the rescued eaglet, known as DC4, had its right leg lodged in a hole of the nest and was unable to free itself after several attempts Thursday evening. With looming thunderstorms headed for the area, professional tree climbers and an eagle expert were brought in to get the eaglet out safely.

The eaglet was finally removed from the nest at around 8 p.m. and was taken to a veterinarian at the Maryland Zoo in Baltimore to get checked out.

The American Eagle Foundation said DC4 suffered an abrasion and swelling on the leg, and a radiograph found the leg was in “acceptable condition.”

A tree climber helped DC4 return to the nest Friday afternoon and is back with its bald eagle parents affectionately known as “Mr. President” and “First Lady” along with its fellow eaglet, DC5. The eagle couple first nested at the National Arboretum in 2015 and they are the first eagles to nest here since 1947.

Both DC4 and DC5 hatched out of their shells back in March a day apart from each other and are the fourth and fifth offspring of Mr. President and the First Lady.

The eagle family can be seen streaming live at DCEagleCam.org.

Daring rescue of DC eaglet trapped under branch in nest

THE FIRST HATCH! First baby eaglet of the year emerges from shell at National Arboretum