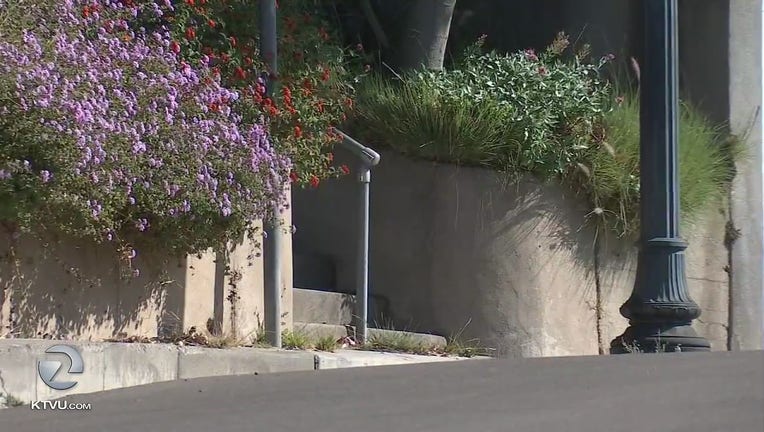 OAKLAND, Calif. - Residents in one Oakland neighborhood are in shock because of what happened there late Tuesday night.

A victim in Oakland's Upper Rockridge neighborhood was confronted by two men wearing masks. One of the suspects may have had a gun.

"We're all terribly mortified and sad that this happened to our new neighbors," said Oakland resident Kathy Jarrett. "The brother of the (home) owner went out to the driveway to get something from his car and was attacked."

It happened around 10 p.m. Tuesday on Golden Gate Ave. near Acacia St.

Jarrett describes what happened next.

"They put zip ties on him, and as I recall, they put duct tape on his mouth."

The men then forced him inside the house where they took his ATM and credit cards, along with his sister's wallet. The sister, her husband and their children were inside the home at the time.

"Fortunately they did not physically harm him or the family, which was asleep in the house," said Jarrett.

But the suspects weren't done yet. The pair took the victim to an ATM in Berkeley and forced him to withdraw money.

The men forced him to drive in his car to downtown Berkeley while a third suspect person followed in the suspects' car.

They ordered him to get cash from an ATM, and then left him with his car in Berkeley.

Oakland police are investigating the incident which happened on a quiet street in the Oakland Hills, famous for their scenic views.

Residents and those visiting family in the neighborhood were stunned Thursday after hearing about what happened.

"I can't believe though that he was abducted. I have to tell my daughter, my son-in-law when they come home here tonight, because that is beyond," said Myra Dwoskin, who was visiting family in Oakland.

"This has always been a safe neighborhood, said Oakland resident George Krevsky. "We have had break-ins here at the house, those were about 20 years ago, but recently, it's been relatively safe."

If caught, the three suspects responsible could face charges of burglary, robbery and kidnapping.

Anyone with information is asked to call the Oakland Police Department.