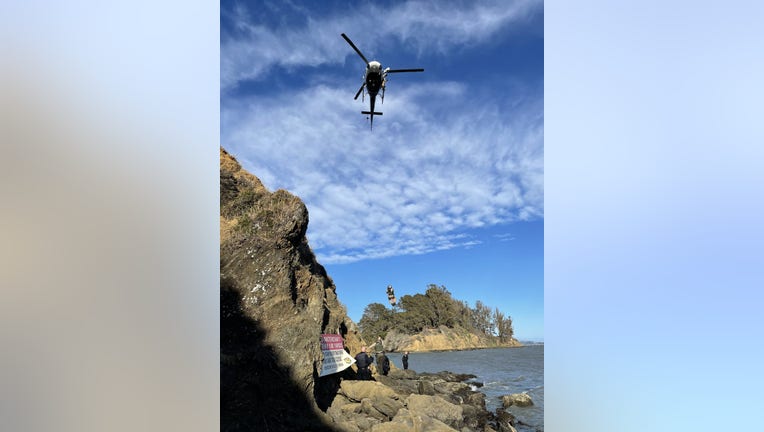 A CHP helicopter above West Marin Island, during a pursuit of a suspect wanted for assault and robbery on June 7, 2021. (Photo courtesy San Rafael Police Department)

SAN RAFAEL, Calif. - A 51-year-old woman led authorities on a low-speed chase Monday in San Rafael that included hopping fences in a gated community and swimming to West Marin Island, all in an effort to elude capture after police said she assaulted a grocery store clerk with a hammer, a bottle and her fists.

San Rafael police received a 3:15 p.m. report of a disturbance at Andy's Local Market at 75 Loch Lomond Drive. As police were on another priority call at the time, deputies from the Marin County Sheriff's Office responded to the scene, where the suspect had already fled.

Witnesses said the woman had hit a store employee with a bottle of alcohol and with her fists.  The suspect was later identified as Julianne Riebeling, who has no fixed address.

Police said Riebeling returned to the store at 3:45 p.m. and tried to hit the same store employee with a hammer. She fled the store before the arrival of police, who picked up her trail as she hopped backyard fences in the gated community of San Pedro Cove before reaching the shoreline near the 400 block of Bay Way.

Police then saw Riebeling enter the water and begin swimming eastbound into the Bay.   Police requested assistance from the California Highway Patrol and the U.S. Coast Guard, who used a helicopter and a boat, respectively, to reach the island.

After Riebeling reached the southwestern shore of West Marin Island, officers from all three agencies arrived. After refusing to comply with authorities, Riebeling ultimately surrendered peacefully, police said.   Police arrested Riebeling on suspicion of several offenses, including robbery, assault with a deadly weapon and resisting arrest.