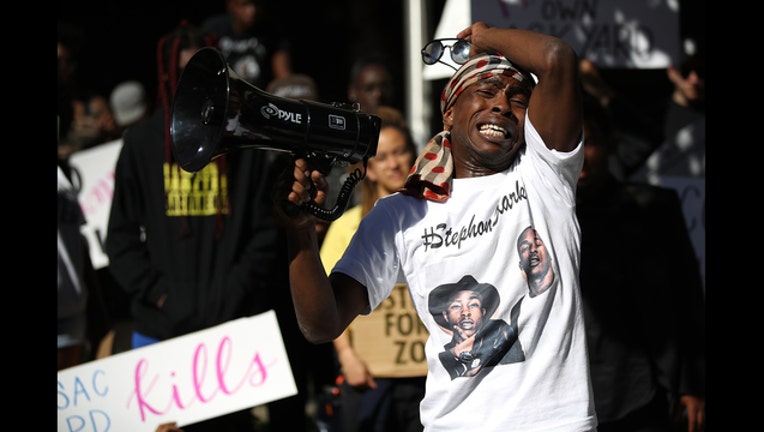 SACRAMENTO, Calif. (AP) -- Sacramento police have issued their first written policy on when officers can turn off body cameras after two officers muted their microphones following the fatal shooting of an unarmed black man in his grandparents' backyard, and promised Tuesday to release more video footage in a week.

The Sacramento Police Department made the unusual decision to release video of Stephon Clark's shooting within three days after he was killed, including body camera footage from the two officers who shot the 22-year-old and from a sheriff's department helicopter circling overhead.

A spokesman, Sgt. Vance Chandler, said the department has a 30-day deadline from the March 18 shooting to release remaining video and audio recordings, including those from other responding officers and police squad cars.

Police Chief Daniel Hahn told City Council members that the department is also working to give new officers training and experience in avoiding implicit racial bias, including having them tour and do public works projects in predominantly minority neighborhoods. He spoke at a special meeting focused on department policies and practices after weeks of protests roiled California's capital city, disrupted professional basketball games and blocked rush hour traffic.

"This is a very complex issue and it will take complex solutions. Our community is crying out for change," said Hahn, who became the city's first black police chief last year.

Mayor Darrell Steinberg said the council wants answers from Hahn in coming weeks on improvements to its policies and practices. He told Hahn that reconsidering the department's foot pursuit policy to minimize the use of lethal force should be "a top tier priority" for consideration.

Stevante Clark, Stephon's brother, shook Steinberg's hand weeks after cursing him at a much more unruly meeting. Stevante Clark began his brief remarks by leading the crowd in chanting his brother's name, then asked to meet privately with Hahn and Steinberg. He urged the media not to further air video of the shooting because it is distressing the family.

"My heart is gone," he said, repeatedly tapping his head. "Emotions, feelings...."

Two other members of the audience were escorted from the council chamber by police without incident after repeatedly interrupting other speakers or using profanity. Many of the roughly 60 activists and community members set to speak called for the two police officers to be fired and criminal charged, though experts cite court decisions that have held officers may use lethal force if they reasonably fear for their safety.

Body camera footage of Clark's killing reveals that the two officers were told to mute their microphones several minutes after the shooting.

The new policy requires officers to verbalize their reason for turning off the microphone.

Body camera use is covered in training but officers haven't received any written direction on when the equipment can be turned off until now, police spokesman Sgt. Vance Chandler.

Officers were previously told they could mute their cameras for personal conversations, including those that involve a supervisor, tactical discussions or times when a citizen requests that the camera be turned off, such as during a victim's statement.

The policy was in the works before Clark's shooting but his death prompted the department to issue the guidance more quickly, Chandler said.

He said the department is still investigating who told the officers to turn off the microphones; whether that person is a supervisor; and whether the decision was appropriate.

The department is adopting a widely used policy that should already have been in place, said Geoffrey Alpert, a professor of criminology at the University of South Carolina and an expert on police use of force.

"At least at this point they've got the proper rules in there now," he said. "It shouldn't happen again, but it shouldn't have happened in the first place."

The new policy says "employees shall not deactivate or mute their (cameras) until the investigative or enforcement activity involving a member of the public has concluded."

Officers can turn off their cameras while dealing with a victim of sexual assault or if a supervisor instructs them to do so.

They can also turn off the equipment if a victim or witness is refusing to provide a statement on camera and the situation is non-confrontational, or when speaking to a doctor, nurse or paramedic.

Councilman Allen Warren said it should be updated to include specific penalties for violating the policy.

This story has been corrected to show the police department spokesman's name is Sgt. Vance Chandler, not Vince Chandler.