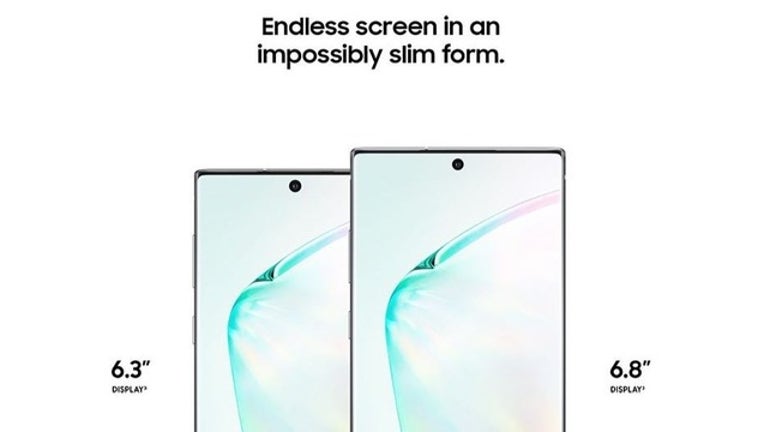 San Jose, Calif. (KTVU) - Features of upcoming Samsung Galaxy Note 10 and Note 10 plus leaked ahead of its scheduled reveal at the Unpacked event, scheduled for Wednesday in New York. Samsung is positioning the upcoming Note devices as "a computer that's a gaming console, film studio, and an intelligent pen," promo materials leaked by Droid Life reveal.

The two devices have 6.3-inch and 6.8-inch bezel-less displays, the promo copy reveals. Air gestures on next-generation S Pen can be used to "take hands-free pictures, change playlist tracks, or flip through slides in a presentation, all from a distance," the feature copy reads.

Other features on the Note include quick charging capability called "Superfast Charge", which promises hours of power on minutes of charge, "precision sound recording" and a "pro-grade" camera.

According to previous rumors, the phones will be fitted with a Qualcomm's Snapdragon 855 processor, and come with 8 and 12 GB RAM respectively, with 256 GB storage, and a microSD card slot on the Note 10 plus. Battery sizes vary - 3,500mAh on the Note 10, and a 4300mAh battery on the Note 10+.

Samsung's other flagship device - the Galaxy Fold is gearing up for a September launch, following a rash of display issues in initial review units which forced the company to postpone its initial April launch date. Samsung did not commit to a specific launch date, though it detailed all the construction and design improvements it made in an announcement late July.