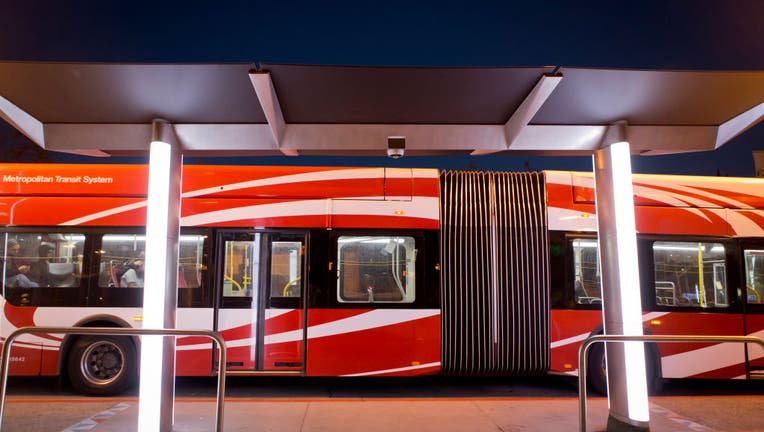 SAN DIEGO - San Diego County's transportation agency has apologized and agreed to pay $5.5 million to the mother of a mentally ill man who died after a security officer kept a knee on his neck for several minutes.

It was announced Monday that the Metropolitan Transit System, its security contractor and their insurers will split the payment in a mediated settlement over the 2019 death of 24- year-old Angel Zapata Hernandez.

The agency last summer revised its use-of-force policies, including banning chokeholds and knee restraints for the head, throat and neck.

The announcement comes in the midst of the trial of Derek Chauvin, a former Minneapolis police officer charged with murder in the death of George Floyd. Chauvin pinned his knee on Floyd’s neck for nearly 9 1/2 minutes last May.

Former Minneapolis police Officer Derek Chauvin was convicted of murder and manslaughter in the death of George Floyd.

Hernandez, who had been diagnosed with schizophrenia, was seen wandering and acting erratically near tracks in downtown San Diego, authorities said.

He ran from an MTS code compliance officer and was grabbed by the officer and a contracted transit security officer, authorities have said.

The MTS released video from security cameras and the officers' body cameras that showed Hernandez running, then being handcuffed and taken to the ground. He struggles while face down, with officers putting knees on his back and neck.

A lawyer for the family alleged that one officer kept a knee on Hernandez's neck for around six minutes.

Hernandez eventually stopped breathing and was pronounced died at a hospital.

The MTS officer and the security officer later resigned, although the MTS said its officer's resignation was unrelated to Hernandez's death.

No criminal charges were filed but at Monday's news conference, Sharon Cooney, chief executive officer of the transit agency, said the officers "made mistakes on Oct. 15, 2019, that contributed to Mr. Hernandez's death."

"We do believe that without a doubt, that the awful outcome could have been avoided had we provided better training for psychiatric emergency response and more robust de-escalation training," Cooney said.

"His death has left an emptiness in our hearts that will never go away," Hernandez’s mother, Claudia Hernandez, said at the news conference. "The best way to honor Angel’s memory is that no family ever has to suffer the needless loss of their child."

County Supervisor Nathan Fletcher, who chairs the MTS board, called Hernandez’s death "a terrible tragedy that should not have occurred" and apologized to the family.