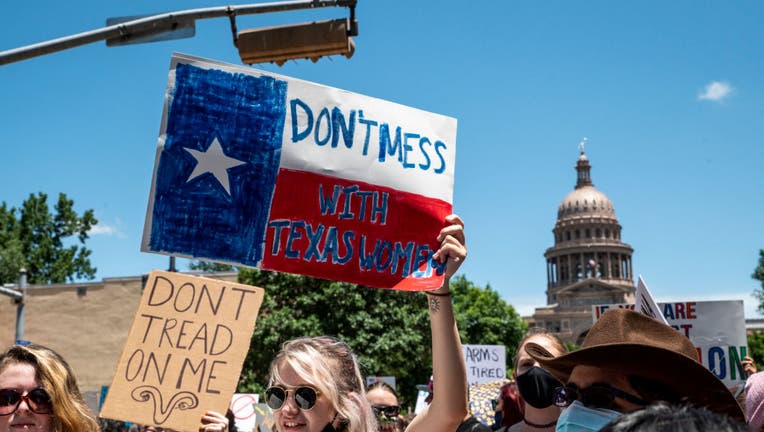 FILE: Protesters hold up signs as they march down Congress Ave at a protest outside the Texas state capitol on May 29, 2021, in Austin, Texas. (Photo by Sergio Flores/Getty Images)

SAN FRANCISCO - A San Francisco-based public relations firm has offered to pay for its Texas employees to relocate after the state's recent ban on abortions.

Bospar, which dubs itself as a politely pushy tech PR agency, said that it has created the Texas Relocation Plan to streamline the process for employees

"Under the new plan, Bospar will pay for the expenses of any staff member needing to relocate to ensure they have control of their reproductive health," the company said in a news release.

The program is available to all its staff members in Texas, both men, and women. Bospar said it's prepared to open the program up to staff members elsewhere if other states pass similar abortion restrictions.

"At Bospar we believe this relocation program – or evacuation program – makes good business sense. We predict other companies will take similar action to retain the best talent until Texas reverses this self-inflicted brain drain," the firms said in a statement. "While we are disappointed that other agencies and companies have not taken similar stances yet, we realize this is what true leadership is like: taking a stand first and leading the way."

Under the statute, someone could bring a lawsuit — even if they have no connection to the woman getting an abortion — and could be entitled to at least $10,000 in damages if they prevail in court.

The Justice Department on Thursday filed a lawsuit against the state of Texas in response to the new law, arguing that it was enacted "in open defiance of the Constitution."

"The act is clearly unconstitutional under long-standing Supreme Court precedent," Attorney General Merrick Garland said at a news conference Thursday where he announced the suit.

The Justice Department contends that the Texas law unlawfully infringes on the constitutional rights of women and violates the Supremacy Clause of the Constitution, which says federal law supersedes state law.