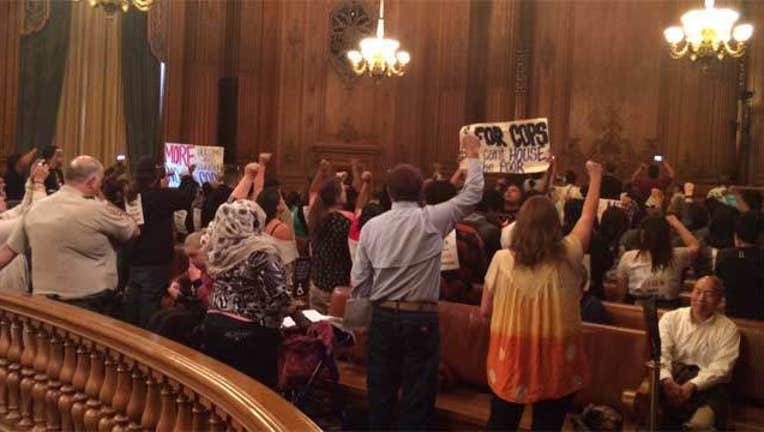 While dozens of residents spoke out last week during a public comment period at the Board of Supervisors meeting, dozens of protesters appeared in chambers again Tuesday.

The lack of a public comment period did not stop opponents of the ordinance from vocalizing their disdain for the ordinance which will increase police staffing levels in the city.

The ordinance, which is co-authored by Supervisors Scott Wiener, Malia Cohen and Mark Farrell, requires that the police department expand based on the city's population increase, but critics of the ordinance say that increased police staffing levels won't necessarily reduce crime.

At Tuesday's meeting, protesters interrupted supervisors who supported the ordinance chanting, "Crime is down, we need housing in this town."

At one point in the meeting, dozens of protesters stood up from their seats, turned around and displayed signs pinned to their shirts that denounced the ordinance. Many raised their fists in the air and chanted "schools not jails" and expressed their disappointment to Cohen and board president London Breed, who are both African American.

One protester interrupted the meeting to tell Breed that she is out of touch and doesn't represent the people of her district. Another protester told Breed that her ancestors were offended by her decision to support an ordinance that would allegedly exacerbate police brutality in her neighborhood.

Wiener said that the aim of the ordinance was to ensure that the city has enough officers to walk beats and so that the police department is able to adequately enforce traffic violations.

The crowd interrupted his speech with hissing and yelling. The meeting was stopped numerous times and by the end the majority of protesters were escorted out of chambers by sheriff's deputies.

Supervisors David Campos, John Avalos, Jane Kim, Eric Mar and Norman Yee suggested ways that the police department could increase their accountability in the eyes of the community.

They recommended funding to provide officers with extensive racial bias training and urged the board to involve the San Francisco Police Commission in their decision to increase staffing levels.

Kim said that she doesn't think the increase in police staffing would have the desired impact. She said that in Sacramento more crime occurred with an expanded police force.

Instead of passing the ordinance, she suggested growing the city's Homeless Outreach Team and putting more money toward housing the homeless.

She suggested that instead of paying six-figure salaries to 283 new officers, instead the city should give those funds to 283 of the city's most at-risk, low-income youth to ensure that they can have fewer barriers to success.

"What if we commit the salaries of 283 new officers to 283 of our most at risk youth?" Kim asked her colleagues.

She suggested that for the next 25 to 30 years those funds could instead go to 283 of the city's neediest children and ensure that they have access to great education, healthy meals, steady housing and even ensure that they can afford college tuition.

Opponents of the ordinance burst into cheers in response to Kim's suggestion.

"Would that make our city safer?" Kim asked.

He said adding more officers won't make the city safer, and that instead the city should focus on reforming the police department's conduct and training.

Campos said he felt the proposed ordinance dealt only with police staffing and failed to address the major national and local issues of racial profiling and bias policing.

He said he fears the policy will do more harm to the police department and its relationship with the community.

In addition, Campos said that this week a judge ruled that the San Francisco Police Commission was not in a position to decide whether the officers found to be involved in the text messaging scandal will be fired, because the police department may have known about it years prior to its coming to light publicly.

He said that there is a real possibility that despite San Francisco Police Chief Greg Suhr's recommendation that the officers be fired, the court could reinstate them.

"The court is saying that this department did not act appropriately," Campos said, explaining why he does want to give them more funding.

Kitzia Esteva, a 27-year-old San Francisco resident, and an immigrant rights organizer for the non-profit Causa Justa, stood outside City Hall prior to the vote and said she expected the ordinance to pass but said she thinks it's the wrong approach.

Esteva said that the city is already a hotbed for racial profiling and that more officers are not needed. She said better training is needed.

"Police misconduct does not deserve more money," she said. "Why would you reward them with $35 million more?"

She said in light of the texting scandal, and pending federal investigations into police shootings in the city, "it makes no sense" to encourage misguided policing.

She said as the city population increases, so does the need for social services, job opportunities, affordable housing, health care and school programs.