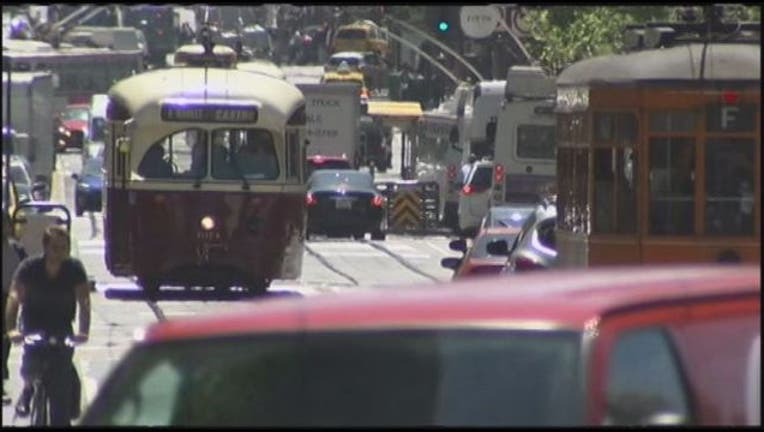 SAN FRANCISCO (KTVU) - Young San Francisco students are getting a one-of-a-kind education this week in the city's Chinatown district.

Kindergarten through fifth-grade children are being trained as "City Street Investigators," getting lessons on pedestrian safety in some of San Francisco's most dangerous intersections.

"Kindergartners and first-graders, they have a very difficult time perceiving speed and distance," said David Wright of the Chinatown YMCA. "So they may think that they have enough time to cross the distance but they don't realize actually how much time it takes them. So we've been working on helping them build those skills."

The program was developed by the Chinatown Community Development Center, Walk SF and the YMCA as part of a citywide effort to reduce pedestrian fatalities to zero. It's not just the basics such as "look left, look right, look left again, before crossing."

"It's teaching them to say, 'Well, on this street there should be a signal because cars are not stopping or slowing down enough," said Walk SF Membership and Volunteer Director Natalie Burdick. "The focus really on the training is to make the children feel empowered their neighborhood and their community so they make it safer and better for themselves, their parents, their grandparents."

Kids use radar guns and take notes on misbehavior by drivers and pedestrians. "I learned that a lot of people, that when they cross the street, they look at their phones," said fifth-grader Eva Zheng. "When the pedestrians are supposed to cross the street, a lot of cars just turn and sometimes, you might get crushed."

Lamia Haynes clocked drivers at speeds around 53 miles an hour in a 25 mile an hour zone. "They stop at the wrong moment and they almost hit the pedestrians," said Haynes.

Over 600 Chinatown students will take the class by the end of the week.

The hope is to possibly expand the curriculum citywide later this year, with the children passing their lessons on to the adults in their lives.

"We're hoping that the kids in turn can kind of check their parents and grandparents as they're crossing the street and say, 'Now is not okay for me to walk against the light,' or 'We should watch out for this type of movement on the street,'" said Chinatown Community Development Center Senior Community Organizer Angelina Yu.