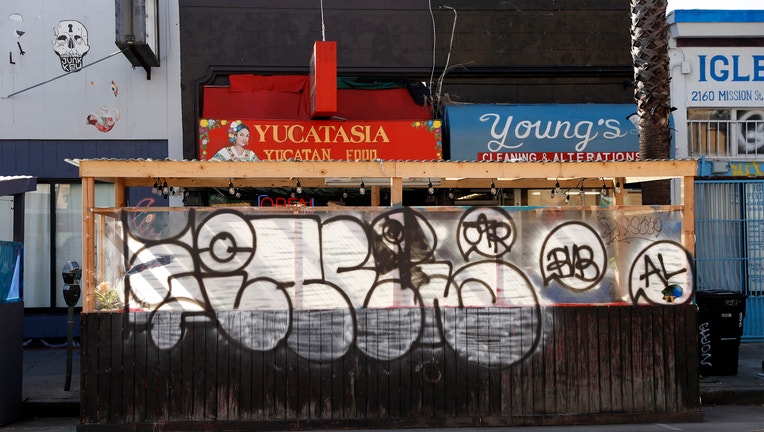 SAN FRANCISCO, CA - MARCH 8: Graffiti on Yucatasia parklet on Mission Street in San Francisco, Calif., on Monday, March 8, 2021. A member of the county board of supervisors is seeking to suspend the punitive law that holds property owners responsible

SAN FRANCISCO - Help may be on its way soon for San Francisco businesses tagged with graffiti.

Supervisor Myrna Melgar introduced legislation that will allow property owners on business corridors to opt-in and allow the Department of Public Works to address graffiti for no charge.

Co-sponsored by Supervisor Catherine Stefani, the ordinance would create a two-year pilot program to shift the responsibility from participating business owners to the city's Department of Public Works, which would proactively monitor routes on a regular schedule and paint over graffiti as it is spotted.

Currently, business owners are responsible for painting over or removing graffiti within 30 days or they face fines from the city.

"This pilot program is meant to offer back some support and appreciation while businesses regain financial health," Melgar said in news release from her office.

The announcement did not indicate when the board would take up the issue at one of its meetings.

The program received support in the news release from Sharkey Laguana, President of the Small Business Commission.

"This proposal takes a much-needed, proactive approach to dealing with graffiti in our commercial corridors," Laguana said. "I'm thrilled that San Francisco can join other major cities like Boston, New York, and Los Angeles in supporting small businesses who are victims of graffiti."