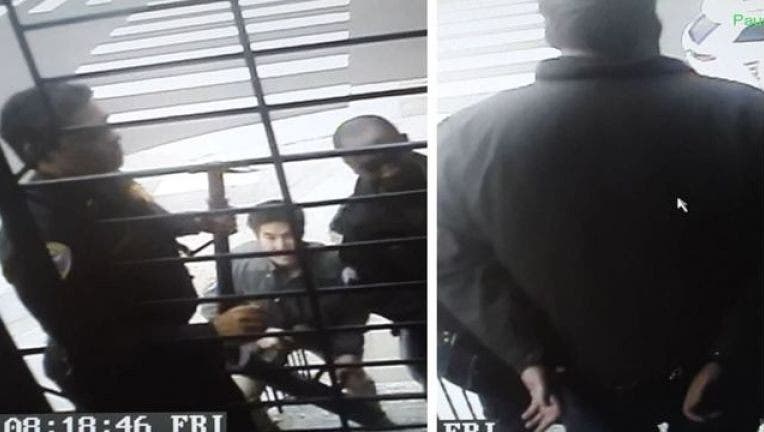 San Francisco police knock on Bryan Carmody's door with sledgehammer and detain the freelance videographer. May 10, 2019.

Supervisor Shamann Walton proposed creating an Emergency Family Relief Fund that would provide $500 to about 5,000 families, or residents with children 18 and younger, affected by the COVID-19 pandemic, who don't qualify for federal benefits.

"COVID-19 has created a threat to the economic stability of San Francisco residents and San Francisco families, especially our immigrant families who work in the service industry such as restaurants, retail, cleaning and janitorial services," Walton said.

The proposal has three parts.

The first involves an emergency ordinance to begin the program for as many as 60 days.

A second complementary ordinance would extend the program for as long Mayor London Breed keeps in place the emergency shelter-in-place order and for two months longer.

A third ordinance would allocate $10 million from the city's reserves to the program.

Supervisor Hillary Ronen, who is a cosponsor of the legislation, and represents the Mission and Portola neighborhoods, said, "We believe that our immigrant communities in San Francisco are as deserving as the rest of us for help during this crisis. We will step in strong and loud as a local City and County where our federal leaders have failed to help our immigrant population."

The fund will be administered by among others community-based organizations that work directly with impacted families.

Supervisor Rafael Mandelman also introduced a resolution to urge California to enact a moratorium on foreclosures and residential and commercial evictions for the duration of the state of emergency.

Supervisor Gordon Mar introduced a resolution to declare COVID-19 an extreme danger to the public so that owners of small businesses and restaurants can recover business interruption insurance from private insurers.

"The insurance companies are denying coverage claiming COVID-19 does not cause property loss or damage, a requirement for a payout," he said. "As a local government we know it is necessary to require all businesses to close down except essential businesses, and we acknowledge that it was because of the virus's interaction with physical surfaces, contaminated hands and respiratory droplets."

Mar is calling on California Insurance Commissioner Ricardo Lara to consider it a material misrepresentation for insurers to deny coverage because of claims the coronavirus doesn't cause property loss or damage.

The settlement of Bryan Carmody's unmitigated claim was unanimously approved by supervisors.

Carmody's home and office were raided by San Francisco police last year following the fallout from the investigation into the death of Public Defender Jeff Adachi.

The claim, filed in August 2019, followed a police investigation into the alleged theft of leaked police documents related to Adachi's death.

Free speech groups criticized the raid, and police later admitted to conducting unlawful searches, leading to an independent investigation into the leaked documents. "This was a shame to the city and county of San Francisco," Supervisor Aaron Peskin said. "I hope that we never in this town ever again suppress the rights of the free press."